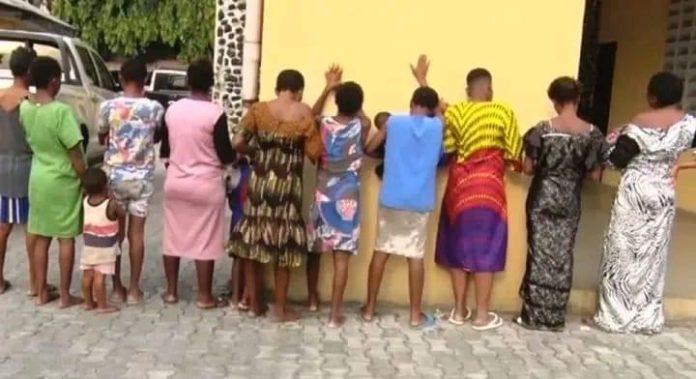 Operatives of Rivers Police Command, have arrested a 17-year-old boy identified as Noble Uzuchi, alongside his accomplice, Chigozie Ogbonna, 29, for impregnating 10 ladies as part of running a baby factory.

Aside from Uzuchi, and Ogbonna, the police also apprehended two other ladies, Favour Bright, 30; and Peace Alikoi, 40.

According to the Rivers Police Public Relations Officer (PPRO), Grace Iringe-Koko, who disclosed the arrests, the four suspects operated in Obio/Akpor and Ikwerre local government areas of the state.

While noting that the suspects were arrested following a tip-off, Iringe-Koko said the 10 pregnant ladies had been rescued.

He noted that investigations revealed that when a victim was delivered of her baby, the syndicate leader kept the child and paid her a sum of N500,000, adding that some of the babies previously delivered in the houses had been sold.

She said, “All the victims confessed that they were lured to the illicit sales of children because of the need to meet some financial challenges. A Honda Pilot Jeep, white, was recovered from the syndicate leader.”

Iringe-Koko noted that the case had been transferred to the State Criminal Investigation Department (SCID) for investigation, and efforts were being intensified to track and arrest the buyers of the children already sold.

Man nabbed for hacking billboard in Rivers, streaming ‘pornography’ on it