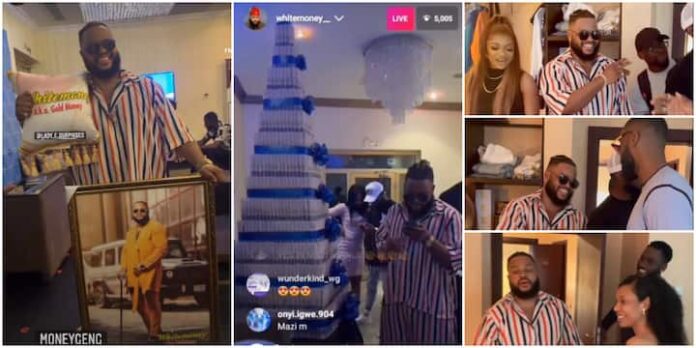 BBNaija Shine Ya Eye winner, Whitemoney, has continued to receive an outpouring of love from his fans The reality star was recently gifted a giant-sized 13-tier money cake, a picture frame and other impressive gifts Ex-BBNaija season six housemates, Liquorose, Pere, Nini and more also visited Whitemoney after he was hospitalised BBNaija Shine Ya Eye winner, Whitemoney, is no doubt loved by numerous fans and a number of them have gone all out to make him feel more special.

The reality star who was recently bedridden after he was hospitalised was visited by some of his BBNaija co-stars at his hotel after his recovery. In videos posted on Whitemoney’s Instagram story, some of the ex-housemates including Liquorose, Pere, Nini and Emmanuel made sure to show love to the recovering young man.
In one of the clips, Liquorose was seen excitedly running to hug Whitemoney as she was obviously pleased to see him standing and well.

Whitemoney’s fans were also not left out in the show of love and he was presented with a sky-high money cake made of 13-tiers of crisp 500 naira notes.
As if that wasn’t enough, the BBNaija season six winner was also gifted a customised throw pillow as well as a huge picture frame.