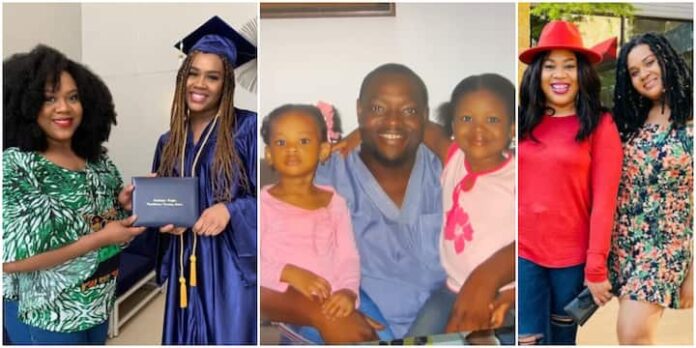 Veteran Nollywood actress, Stella Damasus, has taken to social media to shower accolades on her lookalike daughter Stella’s second daughter, Angelica, clocked 19 on October 13 and her mother made sure to give an emotional speech Not stopping there, the movie star shared series of throwback photos of the little girl including one of her late father, Jaiye Aboderin Popular Nollywood actress, Stella Damasus, had more than enough reason to celebrate after her lookalike daughter, Angelica, turned a new age.

The pretty youngster clocked 19 on October 13, 2021, and her mother made sure to celebrate her with touching words in an emotional video.

The movie star noted just how much she was proud of her little girl and explained that she made it so easy to be a mum.
Stella added that Angelica is her friend and her everything. Not stopping there, she noted that her child was very intelligent and that she got into her school in Columbia, New York, via scholarship.

According to the actress, she doesn’t know what she did to deserve a daughter like her and she thanks God every day for her life.

“She is my pride and joy. Angelica makes it so easy to be a mum. She is my friend, my everything. So intelligent. She got into Columbia in New York via scholarship. So beautiful, so fashionable, she loves God. I don’t know what I did to deserve a daughter like her and I thank God every day for her life. Angelica I love you so much, happy birthday.”

Not stopping there, the actress used the remaining part of the three-minute clip to share adorable throwback photos of her daughter.