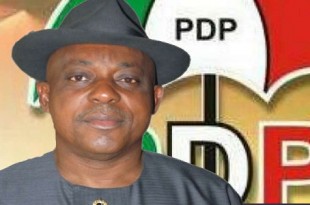 “This meeting has agreed that immediately the NEC of the party should be convened for the party to constitute the national convention planning committee and the early convention should be held latest before the end of October.

“Also, that the zoning committee for the party positions should also be constituted by the same National Executive Committee to be held immediately.

“So, we thank members of the party for holding out, for their support. We also thank well-meaning Nigerians who have been waiting patiently for the resolution of these issues.”

When asked who will summon the NEC, Tambuwal added, “The NEC of the party shall meet most likely next week and all the issues will be addressed, and that NEC will be convened by the chairman of the party who is constitutionally endowed to do so.”

The PDP-GF further gave insight into the level of effort that led to the resolution of the leadership as according to a statement issued by its chairman after the meeting, there were extensive consultations with all major stakeholders in the party with a view to bringing all tendencies within the party together “in view of the ur- gent task facing the party as the only viable vehicle to checkmate the abysmally poor governance of the APC-led Federal Government.”

The statement added, The meeting deliberated extensively on the issues thrown up and resolved as follows, that the constitution, traditions and practices of the party should be strictly adhered to in finding solutions to any problems; that all parties should sheathe their sword in the greater interest of the PDP and the need to rescue Nigeria from the avoidable national malaise and drift occasioned by the APC administration.

“That all processes leading to an early National Convention in October be immediately activated by relevant Party organs, especially National Executive Committee (NEC) and that the party should redouble efforts to provide a credible alternative leadership for Nigeria as it still remains the only hope for the Nigerian people for good governance.

“We shall overcome and restore peace, security and development once again to Nigeria,” the statement.

Speaking before the meeting went into a closed session, the Governors Forum boss asked party supporters to disregard the rumour of more governors elected on the PDP platform will defect to the All Progressive Congress (APC) as he noted that the party has become non-existent.

He maintained, “You can see clearly that 13 over 13 of your governor’s your ambassadors are in this meeting, fully committed to not only resolving the issues at hand, but also working assiduously towards delivering good governance in our respective states and moving our party forward.

“Speaking on behalf of my colleagues, we have resolved, we are committed to remaining in PDP. Disregard any rumour, every rumour that any of these distinguished leaders are going anywhere. We are in PDP, we are going to remain in PDP and by the grace of God who shall be working together to salvage Nigeria.

“So, where are you going? Are you defecting to Federal Government? Federal government is not there because if it is there, asked my colleagues who are in APC. One of them came out to say that when his students were abducted that he saw no help. He received no help from the federal government, and he is a governor of APC. So, what are we talking about?

“There is no party to defect to, there is no government to defect. We better remain together and work together, reinvent our party, and work towards the establishment of government of the Federal Republic of Nigeria.

“We are committed to resolving all the issues we have, and you will soon hear from us, what our own views and position are as your children, as people that you have facilitated and helped to put in office not your financiers.”

Also speaking during the meeting, chairman of the PDP e-membership registration committee and Governor of Edo state, Godwin Obaseki, revealed that over 10,000 Nigerians registered less than 24 hours after the exercise was launched on Monday. He said that the target of the exercise is to capture 40 million Nigerians, which he said would guarantee victory for the PDP in future elections.

Obaseki stated, “Our target is to register 40 million Nigerians as members of PDP and once we achieve that we shall win every election landslide going forward and there will be no bases to cheat us as was done in the past.

“I want to reiterate that the process of e-registration is local, it is meant for us leaders at the ward level and at the local government level to own our party the PDP. Every leader must now show us their followers by registering their followers as members of the party, PDP. Once you have registered and have completed the process, your party card will be printed here at the party Secretariat and sent to the ward for distribution to members of the party.

“As of today, we are launching a pilot of the resignation exercise using the following state as pilot: Adamawa state, Ekiti, Osun where we almost have 250,000 new voters registered mostly by our party in the ongoing CVR exercise. The whole idea is to make sure that the bulk of those new voters are members of our party and will work for our party in the upcoming election in Osun State.

“The other states are Taraba State, Anambra, Enugu and Edo State. We will run a pilot from today till Sunday this week and from Monday next week, we shall commence a full national rollout.”

Meanwhile, concerned members of the PDP, known as ‘PDP frontliners’ have joined the bandwagon of stakeholders calling for the immediate resignation of the national chairman of the party Uche Secondus.

In a news conference in Kaduna, the leader of the group, Husseini Muhammed who is being supported by Secretary Moses Abidemi and Publicity Secretary Dan Okador noted that the significance of a national political party such as the PDP surpasses any individual’s agenda to perpetuate himself in office. He said Mr Uche Secondus must go.

According to Muhammed, in spite of the outage for him to go due to a below-average performance in the face of limited challenges, Secondus is much eager to remain in office rather than allow vibrant changes that would prepare the party for electoral victory in 2023.

He expressed amazement that rather than stemming the membership haemorrhage of the PDP in favour of the ruling APC Secondus chooses to preside over a situation of growing anarchy that may hinder PDP’s reconciliation process and rob the party of great chances in 2023.”