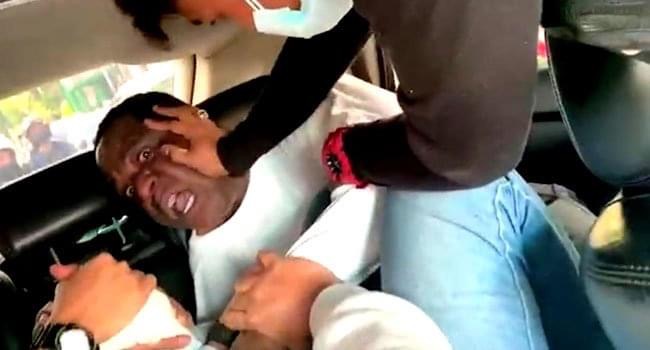 Geoffrey Onyeama, the Minister of Foreign Affairs, has said that the Federal Nigerian Government has demanded that the Indonesian Government sanctions its officials who assaulted a Nigerian Diplomat in Jakarta, Indonesia.

Onyeama disclosed this while briefing newsmen in Abuja on Tuesday, after summoning Usra Harahap, the Indonesian Ambassador to Nigeria, to express the displeasure of the Nigerian government over the development.

The minister said that the Nigerian government had also recalled its Ambassador to Indonesia, Usman Ogah for consultations, including a review of bilateral relations.

Recall that a Nigerian Diplomatic official was seen to be assaulted by some Indonesians immigration officials in a video that went viral on social media.

The video sparked outrage from Nigerians as Onyeama immediately summoned the Indonesian Ambassador to Nigeria on Monday.

Onyeama said the ministry immediately contacted the Nigerian Ambassador in Indonesia, when it noticed the video of the diplomat being restrained by his neck in a moving car on social media.

According to him, the Nigerian Ambassador confirmed that the video was indeed of a Nigerian diplomat in Indonesia and gave a verbal account of what transpired.

He said the Nigerian Ambassador also confirmed that the illegal action took place during a round-up by Indonesian immigration officials, while searching for irregular and illegal migrants in the country.

“The first thing the ministry did was to request that the ambassador submit to the ministry a full and comprehensive report of what happened.

“And to immediately reach the Ministry of Foreign Affairs of Indonesia to lodge a formal and a strong complaint against the actions of the immigration officers as their action violated the Vienna Convention,” he said.

While further stressing that the action was a clear breach of the Vienna Convention, Onyeama said it was an act of egregious international delinquency.

“The following day, which was Monday, we summoned to the Ministry of Foreign Affairs, the Ambassador of Indonesia to Nigeria and again, complained in the strongest terms regarding what had taken place as totally unacceptable under any circumstances whatsoever.

“He, of course, communicated the report that he had received from his capital as to what had transpired. And later yesterday, in the evening, we received a full and comprehensive report from the Nigerian Ambassador in Indonesia.

“And we have studied the report and reinforced our previous position that there was absolutely no justification whatsoever for this treatment for this kind of behaviour.

“Against not only a diplomat, a Nigerian diplomat, but even if it had taken place against any Nigerian citizen, was totally unacceptable.

“So, what we have decided to do is to recall for consultations immediately, our Nigerian Ambassador in Jakarta, Indonesia.

“And we will have full consultations at the highest level and decide what next step to take, including a review, of course, of our relations with Indonesia,” Onyeama said.

“We are No longer evacuating stranded Nigerians abroad for now” – FG