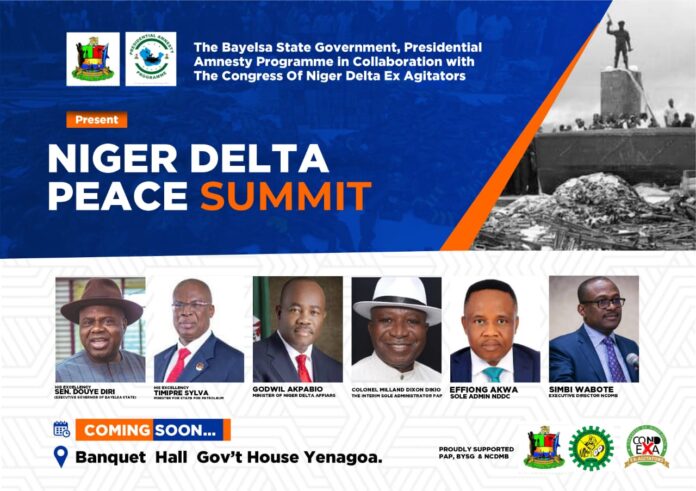 Congress of Niger Delta Ex-Agitators, the organisers of the annual Niger Delta Peace Summit, earlier scheduled to hold in Yenagoa, Bayelsa State, has postponed the event.

The event organised to coincide with the International Peace Day of September 21st, 2021, was designed as part of activities to commemorate the surrendering of arms and embracing of the Presidential Amnesty Programme (PAP) by ex-agitators.

PAP and the Bayelsa State Government were initially named as the main sponsors of the event.

While Diri was named as the host of the event, Dikio and Wabote were also named as the keynote speakers for the summit’s theme, “a  decade of sustained peace in the Niger Delta and challenges to emerging peace”.

In 2018, Niger Delta bubbled with hope and aspirations when the Presidential Amnesty Programme partnered ex-agitators to host a similar event.

The Consultant for the event and Chief Executive Officer, PGR Entertainment, Hon. Seleipre Tonbie, regretted the postponement and said a new date would be announced for the event.

But Tonbie said a second event, the Miss Peace Beauty Pageant, which also highlights the significance of peace in the region, would still hold on October 1, 2021.

Tonbie said: “We regret to announce the postponement of this important event.

“It marks our collective progress towards building a culture of peace, make a stance against crime and violence and serve as a reminder of our permanent commitment to peace above all interest and difference of any kind. We are consulting to resolve issues that led to the postponement and a new date will be announced later”.