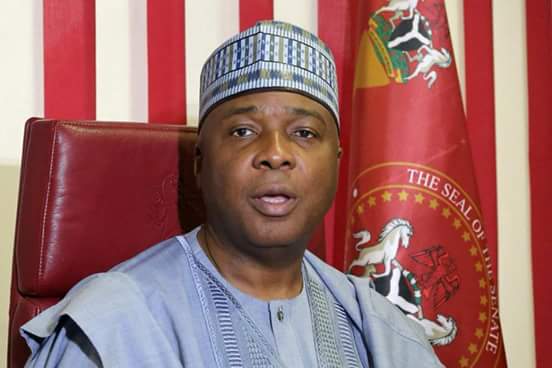 Senate President Bukola Saraki promises to reply the police in 48 hours over the robberies in Offa, Kwara State

Senate President Bukola Saraki said he will send a written response to the allegations made against him by the Nigerian Police, linking him with robbery in Offa on 5 April.

In a twist to the police invitation to the man who is officially the number three citizen in Nigeria, the police backpedaled and rather than asking Saraki to report at Guzape Police station in the Federal capital of Abuja, now asked him to send a written response.

Opinions were divided across Nigeria over the invitation, following police statement that some five ringleaders of the Offa robbery indicted the Senate President and the Governor of Kwara State, Abdulfatah Ahmed.

Saraki had earlier tweeted that he had asked his aide-de-camp to collect the letter of invitation from the police in respect of the allegations, as he wanted to honour the alleged invitation.

But four hours later, the police changed their minds about the invitation.

10h
I have just informed my ADC to get the letter of invitation from @PoliceNG in respect of the allegations raised yesterday — so that I can immediately honour the alleged invitation. 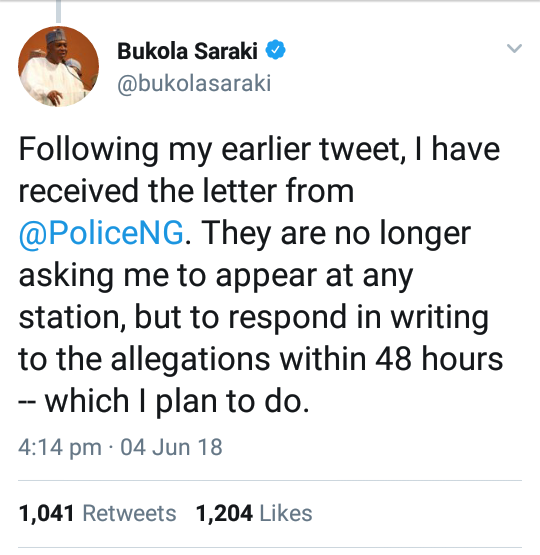 @bukolasaraki
Following my earlier tweet, I have received the letter from @PoliceNG. They are no longer asking me to appear at any station, but to respond in writing to the allegations within 48 hours — which I plan to do.

On Sunday, the police announced they have invited Saraki over the 5 April multiple bank robberies in Offa, during which 33 persons, including nine policemen, were killed.

The police claimed five of the bandits arrested and who have made confessions during interrogations indicted the senate president.

The police therefore wanted to interrogate the senator, who is Number 3 person, in the order of protocol in the country. The police did not give a specific time they wanted Saraki to report.

“The Senate President, Sen. Bukola Saraki is being invited by the Nigeria Police Force to report to the Force Intelligence Response Team office at Guzape, Abuja to answer to the allegations levelled against him from the confessions of the Five (5) Gang Leaders, namely; Ayoade Akinnibosun, Ibukunle Ogunleye, Adeola Abraham, Salawudeen Azeez, Niyi Ogundiran and some of the other Seventeen (17) suspects arrested for direct involvement and active participation in the Offa Bank Robbery and the gruesome killing of 33 innocent persons which include some pregnant women and nine Police personnel”, Moshood said.

The police in the statement appeared to have dropped hints on what they wanted to ask Saraki about, as they claimed that the five men, who were the leaders of the bandits `’admitted, confessed and volunteered statements that they were political thugs of the Senate President, Federal Republic of Nigeria, Sen. Bukola Saraki and the Executive Governor of Kwara State, Alh. Abdulfatah Ahmed”.

The other hints dropped were the recovery of one Toyota Prado Jeep with Reg. No. 19KWGH belonging to the Personal Assistant, Political to the Governor of Kwara State and a Sticker plate number with inscription “SARAKI” “Kwara, State of Harmony”.

According to the police, “the Five gang leaders further confessed during investigation that they are political thugs under the name Youth Liberation Movement a.k.a “Good Boys” admitted and confessed to have been sponsored with firearms, money and operational vehicles by the Senate President, Sen. Bukola Saraki and the Governor of Kwara State, Alh. Abdulfatah Ahmed.”

Police explained why the Chief of Staff and the Personal Assistant to Governor Abdulfatah Ahmed were also arrested:

“The exhibit vehicle was subsequently recovered from the premises of the Min. of Environmental and Forestry in Ilorin, Kwara State. While the sticker plate number with inscription “SARAKI” “Kwara, State of Harmony” removed from the vehicle was recovered from one Adeola Omiyale who drove the said Lexus Jeep to Government House, Ilorin immediately after the Bank Robbery.

“The Personal Assistant (Political) to the Executive Governor of Kwara State, Mr. Alabi Olalekan, who is privy to information that the Police is looking for the Lexus Jeep as an exhibit used in the Offa Bank Robbery… directed one Adeola Omiyale to relocate the Lexus Jeep to Government House, Ilorin. The PA (Political) is currently in Police custody and has made useful statement assisting the Police in further investigation into the case.

“A revolver pistol and pump action gun were recovered by the Police Investigation Team from the Personal Assistant (Political) to the Executive Governor of Kwara State, Mr. Alabi Olalekan’s Farm where he directed his brother to hide them after his arrest by the Police.

“In order to conceal evidence, the Chief of Staff to the Executive Governor of Kwara State, Mr. Yusuf Abdulwahab who has been arrested and taken into Police custody, arranged the removal of the sticker plate number with inscription “SARAKI” “Kwara, State of Harmony” from the exhibit vehicle.

Saraki, in a statement by his media adviser,Yusuph Olaniyonu, described the allegation as baseless and another ploy by the Police to implicate him by all means.

“Let it be known that there is no way I could have been associated with armed robbery against my people,” Saraki said.

“This plot is concocted to embarrass me and, in the mind of the IGP, it is his own response after his refusal to honour the invitation by the National Assembly, headed me, for him to come and offer explanations on the rampant killings and violence across the country.

“Like the earlier one, this frame-up will also fail as I hereby state categorically that I have no link with any band of criminals.

“As a person who has utmost respect for the rule of law and all constitutional institutions, when the invitation from the Police is formally extended to me, I will be ready to honour it without any delay.

“It is however sad that this abuse of the criminal investigation process aimed at intimidating and over-overawing the legislature, thereby obstructing it from doing its work, is a big threat to our democracy “, the Senate President stated.

Resident Doctors Will Account For Any Death During Strike – Senate Committee