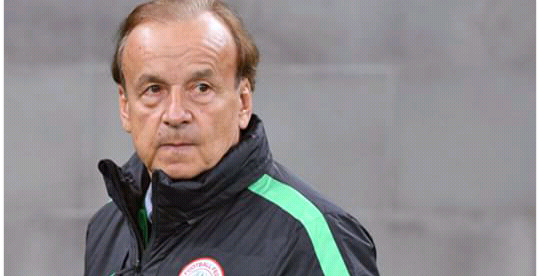 We were not consulted, says Lawal
A member of Nigeria Football Federation (NFF) Technical Committee, former Super Eagles midfielder, Garba Lawal, says coach Genrot Rohr did not consult them before announcing the squad for the World Cup in Russia.

Coach Gernot Rohr on Sunday made public a 23-man squad that will prosecute the Mundial, which begin on June 14.

Speaking with The Guardian yesterday, Lawal said none of the committee members was aware of the final list before it was disclosed to the public.

“I got to know about the list on the social media like every other Nigerian. And I was surprised that the technical committee was not told about the list before it was made public.

“It seems we don’t know what we are doing. Rohr is the one that can answer Nigerians why members like Fanny Amun, Victor Ikpeba, Mutiu Adepoju were not consulted.

“At this moment, whether we say yes to Rohr’s list or not, there is nothing we can do again since the final squad has be named,” he said.

The former defensive midfielder while reacting to the complaints on the inclusion of Ogenyi Onazi, said Rohr should be the one to answer the question.

“I am particularly sad that a player like Uche Agbo, who played week in, week out for his club, Standard Liege of Belgium was not given a chance to prove his worth.

“This guy is a utility player, who as a defensive midfielder, can also operate as a defender in the middle and at both wings. Yet such talent was dropped without a look in. I still believe there are qualities in the team that can make us proud in Russia,” he stated.

Nigerian Player Collapsed And Died During a Football Game (VIDEO)