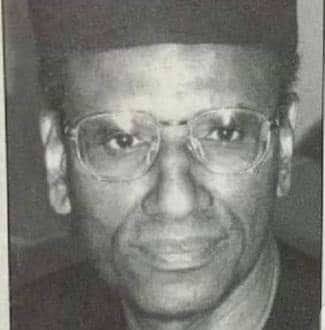 Scholar. Humanist. Philanthropist. Disciplinarian are terms that could be used to describe Mahmud Muhammad Tukur, the elder Statesman who took his last breath in Abuja on Friday. His was a life well lived. During the 82 years he spent on earth, Tukur did not stop breaking grounds.

Although very influential, the late Tukur was not among the elites who wielded their influence as often as possible. The journey of President Muhammadu Buhari into politics is incomplete without Tukur whom many have described as the intellectual powerhouse of the president. He was the Minister of Commerce and Industry in the short-lived military administration of Buhari.

In an interesting piece written sometime in 2019, Eric Teniola, a columnist, went down memory lane in recalling how cabinet members of Buhari’s military regime planned to celebrate the 25th anniversary of Nigeria’s Independence in a special way. Ahead of the big day, they ordered a material which was to be worn by all ministers. But sadly, they never wore it as their government was toppled by General Ibrahim Babangida on August 27, 1985.

As documented by Teniola, 34 years later when Buhari hosted former members of his cabinet at the Presidential Villa in Abuja, all eyes were on one person: Major General Mohammed Magoro, who was Minister of Internal Affairs under the regime. Magoro had worn that particular material to the villa, bringing back memories. But one person who was conspicuously missing at that meeting was Tukur. No record of him visiting the seat of power under Buhari’s civilian rule.

Commenting on the absence of Tukur around the president, an anonymous columnist wrote in 2016, “His (Tukur) noted absence in the Buhari government this time has been puzzling to many who believe that this is the time of great need for highly sophisticated or original thinkers who can produce a sharper organising concept as opposed to the rather fragmentary and samey frameworks abroad so far. An observer compared his absence to that of a trained swimmer and saver who is, however, nowhere to be found in the wake of a massive flood in which people are drowning.

“Generally considered too big to be ignored in a Buhari government, Dr Tukur has, however, been nowhere to be seen as such. There is a generalised belief that he would have been helpful in closing the gap in a Buhari who is neither a global mixer in Obasanjo’s manner or surrounded by crack intellectuals in the mould of IBB and certainly not tested in bureaucratic politics. Thus the felt absence of Dr Tukur has nothing to do with whether he is radical or conservative but simply that he is sufficiently self-confident as far as nationalist reading of economic management is concerned. “It is not common knowledge what might have made him maintain a distance from the government or the government from him this time around. However, a number of people suggest that there is some distance between the two and everything does not seem to be well between the two.”

Tukur’s enviable position and competence increased his public profile in Nigeria. He became friends with contemporaries such as Mamman Daura, Buhari’s nephew, Adamu Ciroma, former governor of the Central Bank of Nigeria (CBN), and Hamza Rafindadi Zayyad, the former head of the Technical Committee on Privatisation and Commercialisation in Nigeria, to form a small clique of policy advocates in Northern Nigeria. The clique was known to some persons as the ‘Kaduna Mafia’, the influential group of young northern Nigerian intellectuals, civil servants, business tycoons and military officers residing or conducting business in the former northern capital city of Kaduna.

In an interview with Daily Trust in 2017, Lawal Idris, a businessman who said he had been close to Buhari since 1972, narrated the role Tukur and Daura played before Buhari joined politics. The septuagenarian who said he conceived the idea of the Buhari presidency, revealed that he could not go directly to the president to discuss politics because he knew that he could meet a brick wall. He rather opted to speak with Buhari’s allies who brought him on board.

“Personally, I have been very close to Buhari since 1972. But I do not know if he is close to me now. Buhari’s presidency started with me alone in year 2000, in my apartment in Arlington, Virginia, United States of America and the reason was simple; of all the people I know (and I know many people), there is no Nigerian that has been tried on so many jobs and was never found wanting like Muhammadu Buhari. What I did was that I spoke to my American friends, they all loved the idea. There was also Ahmed Abubakar, a very nice young man who went round and talked to people in the US; he was working in the Nigerian Embassy in US then.

“When I got back to Nigeria, I had a list of people I wanted to talk to. The first person I called for that project was Engineer Usman Abubakar, now (then) the Chairman of Nigerian Railway Corporation. When he came, I told him this is my project. At first, he didn’t buy the idea, but after a lengthy discussion, he was able to buy into it.
“I said I would find a way to discuss with Mamman (Daura) and Mahmud (Tukur). I then did some thinking on whether to write letters to Mamman and Mahmud or go personally and tell them about my project? I didn’t know what to do. Luckily for me, however, Usman Abubakar, Mamman and Mahmud Tukur shared the same office. So I was just sitting one day when Dr Mahmud Tukur came in and said that he wanted to see me and we sat and discussed. He asked why I wanted to bring General (Buhari) into politics. There was nothing he didn’t say to dissuade me but I told him I had made up my mind. That was a rare luck, as I had high regard for Mahmud Tukur,” he said.

WHY TUKUR PARTED WAYS WITH BUHARI

Insiders said Tukur parted ways with Buhari after the president reneged on an agreement they had about his presidential bid. When Buhari made his first attempt at the presidency, Tukur was among those who assembled a formidable team that marketed the president. When the bid fell through, he returned to the drawing board and Buhari returned again in 2007 but still no luck. After the third failed attempt, Tukur was said to have advised the president to yield the floor to a younger person.

Buhari was said to have initially accepted his idea, vowing not to run again if the 2011 bid ended like the two previous ones. At the International Conference Centre, Abuja, where he had his last political outing before the 2011 election, Buhari wept intermittently as he managed to conclude his 12-page address.

But as time progressed, some persons succeeded in convincing the president to give the presidency another shot and Tukur was said to have parted way with him on this note. He maintained this stand even when the president eventually won in 2015.

In her biography, ‘Aisha Buhari: Being Different’, the First Lady briefly shared an experience on how she married the president in 1989 but details of how they met and who linked them up were missing in the book authored by Hajo Sani, Senior Special Assistant to the President on Administration and Women Affairs. However, insiders have revealed the role played by Tukur, who like Aisha hailed from Adamawa.

“Among the close circle of the president, it’s common knowledge that the late Tukur linked Aisha up with the president. He played a key role in their coming together. May the Almighty Allah grant him eternal rest,” said a source familiar with the matter.

“That’s an open secret among the class of those who have come a long way with the president,” said another source, who did not want to be quoted.

While commenting on the death of Tukur, Asiwaju Bola Ahmed Tinubu, the National Leader of the All Progressives Congress (APC), said, “My deepest sympathies go to President Buhari, First Lady Aisha Buhari and Mallam Mamman Daura.”

He added that he knew the late Tukur well as a scholar, prominent politician and fervent nationalist.

“I commiserate in particular with Dr. Tukur’s family, the academic community, Adamawa Emirate Council and the government and people of Adamawa State over the passing of their illustrious son,” he said.

“May we all find the strength and fortitude to bear this unfortunate loss. I pray that Almighty Allah grant Dr. Tukur Aljanna Firdaus. Amin.”

Born in 1939 in Yola, Adamawa State, Tukur obtained his First Degree in International Affairs and Political Science at the University of Wales (where he was the recipient of the Elizabeth Morris Memorial Prize for graduating first in his class). He also obtained a Master’s Degree in Public International Affairs at the University of Pittsburgh and a PhD. in Public Management at Ahmadu Bello University, Zaria, Kaduna.

He also studied at Northwestern and Oxford Universities. The deceased was a Fulbright-Hays Fellow, senior I.U.C. Fellow and associate member of St. Anthony’s college, Oxford (1974). He goes into history as the first Vice Chancellor of Bayero University, Kano.

In his career as a public servant, the prominent scholar of worldwide fame served on the Adebo and Udoji National Wage Reviews and the Constitution Drafting Committee of 1976, he was also a member of the sub-committee on Citizenship Rights, Fundamental Rights, Political Parties and Electoral System under the chairmanship of Alhaji Aminu Kano. He was a member of the National Constitutional Conference (1994\1995) and the Vision 2010 Committee (1997).

As a business executive, he chaired the activities of Fukarabe Industries Limited, Kaduna, and fulfilled the obligations of many corporate directorships. He was a former director of Cadbury Nigeria PLC and the Coordinator of Policy Analysis Limited. Tukur authored and co-authored many books, of which the most prominent is: LEADERSHIP AND GOVERNANCE IN NIGERIA: The Relevance of Values. The book was published in 1999, the year which democracy returned to Nigeria after 20 years of military interregnum.

He is survived by three wives, prominent among them is (the current proprietress of Ahmadu Ribadu College and Colonel Isa Memorial Academy Yola, Hajiya Zainab Ahmadu Ribadu), nine children and many distinguished brothers, prominent among them are: a global industrialist and a world renowned, business Mogul, Alhaji Bamanga Muhammad Tukur, former Governor of the defunct Gongola state, one time Minister of Industries and another time chairman of the People’s Democratic Party(PDP).

In a tribute to the deceased on Friday, Buhari said: “Dr Mahmud Tukur’s service to the nation will be remembered by generations. He had a passion for a prosperous, economically strong and united Nigeria. He was a proud nationalist.”

Buhari, in his tribute, recalled that as Minister of Trade in his first coming as Military Head of State, Dr Tukur introduced a lot of schemes that revived the local industry, boosted exports and gave real meaning and effect to import substitution in regenerating the indigenous manufacturing sector of the economy.

He prayed to Almighty Allah to accept him in Aljannah Firdaus and give the family, friends, the Adamawa Emirate Council and the people of the state the strength to bear this grievous loss.

Tukur was laid to rest in Yola on Friday.