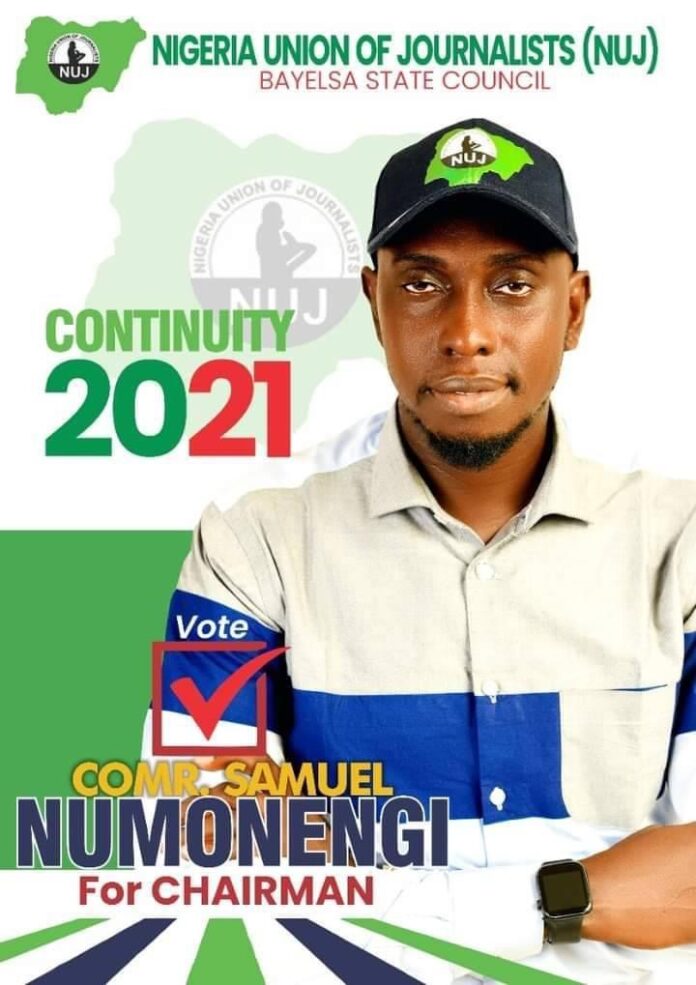 Incumbent State Chairman of the Nigerian Union of Journalists (NUJ) in Bayelsa State, Comrade Samuel Numonengi and eight other aspirants have indicated interest to contest for available seats on the State Executive Committee of the Union come November 3rd, 2021.

Samuel Numonengi, who is a member of the State chapel of the Nigerian Television Authority (NTA) tagged his campaign “Continuity 2021” is slugging it out Comrade Nelson Inebi of the Niger Delta Television chapel with a campaign slogan “Reformation, 2021”.

While the position of the Vice Chairman of the Council is expected to be a battle between Comrade Judith Young and Comrade Tonye Yemoleigha of the same chapel of the State Broadcasting Corporation known as Radio Bayelsa chapel.

Other contestants, who will be returned unopposed are the State Secretary, Comrade Ogio Clement-Ipigansi, the State auditor, Comrade Beatrice Okatubo, State Treasurer, Comrade Joy Ifidi and Pastor Mike Taiyese as the Financial Secretary.

Already the Credentials screening committee headed by a one-time Chairman of the Council, Comrade Tare Akono have given the go ahead to all aspirants to commence campaigns around the 18 chapels under the State Council of the NUJ with over 600 journalists expected to cast their votes.

While Comrade Samuel Numonengi, during his grand opening of his campaign at the NUJ secretariat, urged all members of the council to re-elect him for second term based on his achievement in the last three years,” my administration in the last three years have ensured the payment of weigh-in arrears for state workers and welfare of all members of the NUJ. We have also dedicated ourselves to the unity of members,

Comrade Nelson Inebi, who has contested in the past, promised an improved welfare package to journalists in the state and urged members of the union to ensure a peaceful and violent-free elections in the state council.

Another member of the State Council of the NUJ, who pleaded anonymity, expressed support for the incubent Chairman, insisting that the present administration have also done well to reactivate the Bayelsa State study centre of the International Institute of Journalists (IIJ) which has attracted hundreds of students and lead to the re-training of journalists in the state. On the welfare of journalists, the Numonengi administration has re-activate the NUJ cooperative society where members engaging in savings and benefiting interest of members. Also registered new chapel of the council to increase the national membership.”