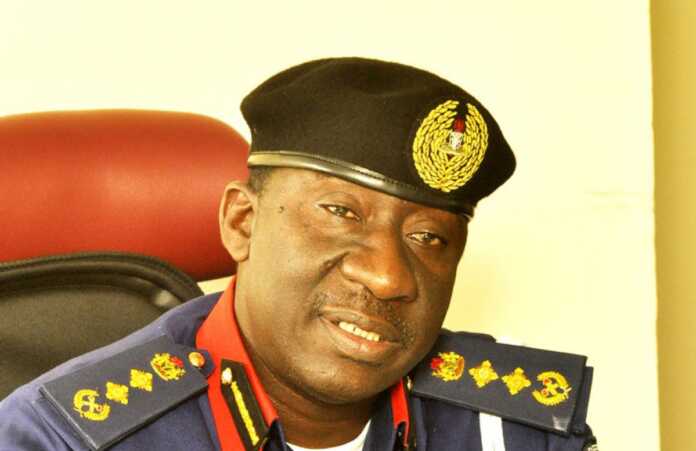 There is confusion at the Nigerian Security and Civil Defence Corps (NSCDC) over Commandant General, Abdullahi Gana.

In 2019, the federal government through the Ministry of Interior elongated his tenure by six months.

NSCDC spokesman, Emmanuel Okeh, in a statement on July 19, announced that the Minister of Interior, Rauf Aregbeshola communicated the approval.

Now, the presidency has asked Gana to remain in office pending an official memo on the next line of action, PRNigeria reports.

Gana was said to have handed over yesterday to a Deputy Commandant General, Hilary Kelechi Madu.

But the presidency, it was gathered, insists it did not give a handover directive and as such, the status quo be maintained.

The claim is that Gana still has two years in service.

If so, stakeholders wonder why was he granted a six-month extension that elapsed on Monday.

Madu is currently the most senior officer at NSCDC after Gana.

The DCG in charge of Operations now has to wait longer as efforts are being made to further extend his boss’s stay in office.

Powerful forces are lobbying the presidency and top officials for this to happen.

President Muhammadu Buhari and Aregbesola had been warned not to grant additional tenure extension to heads of paramilitary agencies.

Makolo said he had no legal power “to recommend or extend the statutory tenure of any public servant, no matter and however industrious such an officer may be.”

The human rights lawyer pointed out that the Public Service Commission is the body empowered with specific provisions for entry and exit.

“The practice of arbitrary, illegal elongation of the statutory tenure of public office occupants sets a dangerous precedent for bureaucracy and national security”, he warned.

NSCDC 2020 Shortlisted Candidates: See How To Update Your Credentials On NSCDC Portal

Taliban To Allow Women Study In Universities But In...

Why we’ll not convert forex in domiciliary account to...