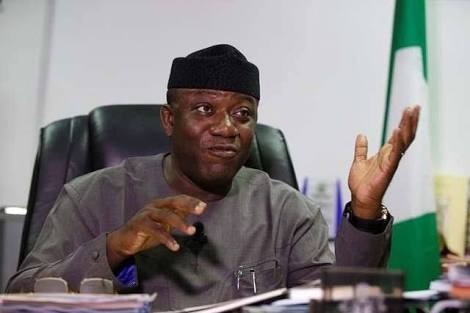 ………States owing salary because of too many idle workers

Governorship candidate of the All Progressives Congress (APC), Dr. Kayode Fayemi has said the only solution to the inability of over 25 States in the country to pay workers salary regularly is for the large number of workforce in the States and Local Governments to be looked into.

He said there were too many idle workers, especially in the Local Government system and that no local council in Ekiti State should have more than 200 workers.

Fayemi, who was speaking in Abuja on Tuesday, while presenting his blueprint to officials of the United States Agency for International Development (USAID), said it was because of his believe in the reduction of workers, especially at the local council level that he converted many council workers to teachers when he was governor.

The APC candidate assured the USAID that he remained committed to all his policies during his first tenure, insisting that drastic decisions must be taken by government to ensure the success reforms that can bring development.

Fayemi said; “Fact is that there are too many people in our LG secretariats doing nothing and getting paid at the end of the month. There should not be more than 200 people working in any of the LGs in Nigeria and Ekiti should not have more than 4,000 LG workers.

“I supported Governor El-Rufai of Kaduna State when he disengaged over 4,000 redundant local government workers in the state. Today, Kaduna is paying workers regularly because the workforce is now manageable and that must also happen in Ekiti.

“Also, Kaduna State is reaping the benefits of the competency test that led to the sack of over 22,000 teachers and employment of fresh ones now.

“There is no reason the government should not create farm settlements and send the idle workers to the farm instead of them staying in the secretariat and collecting government money for doing nothing.

“Reforms like these are necessary to make things work and if I have the opportunity of governing Ekiti State again, I will bring the workforce to a manageable number.”