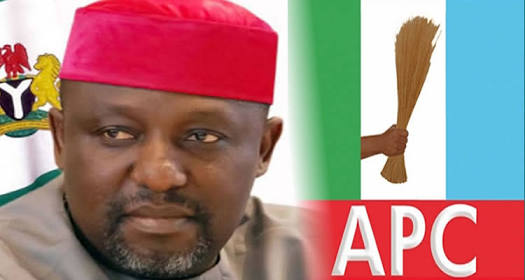 The members of Imo APC stakeholders coalition, a group made up of respected leaders of All Progressives Congress APC in Imo, on Sunday, dismissed claims by Gov Rochas Okorocha, Imo state Governor, that there was a court order restraining the party from conducting state congress in Imo state and there was no congress.

Gov Okorocha had said on Saturday that the Federal High Court in Owerri, Imo state has ordered the All Progressives Congress APC to refrain from conducting Saturday’s state congress or any other congress in Imo, pending the determination of a suit filed by Barr. Mbagwu Augustine and four others against the APC and 10 others, even as he insisted on fresh congresses in the state, adding that APC members believed to be loyal to him were sidelined or schemed out of the exercise.

“There cannot be any contradiction between facts and allegations. We have facts of a successful election, and we will make this documented evidences open to the press to show a successful congress election across the state.”

“So, until they bring out facts to show that there was nothing, only then can you say there is a contradiction. We have facts and figures, documents and pictures, which you (journalists) have also seen here,” he said.

The one time Information Commissioner in Imo, pointed out that even the security agencies present could affirm to the fact that there were elections in Imo State.
Ekechi, however, thanked the party faithful, and the Independent National Electoral Commission, who were on the ground to monitor the elections the centre.

“There is nothing truthful about Okorochas assertion or claim .If the governor claims there was a court order, who was the document served and when did a notice of appearance become a restraining order.”

“The state congress held successfully and we now have a new leadership. After accreditation and voting was over, Chief Hillary Ekeh, Hon Ugochukwu Nzekwe, among others were reelected as Chairman and Vice Chairman of the Imo State chapter of the All Progressive Congress and duly returned by the Imo APC State Congress Electoral Committee and acknowledged by the Chief John Oyegun led APC National Working Committee as duly elected. “