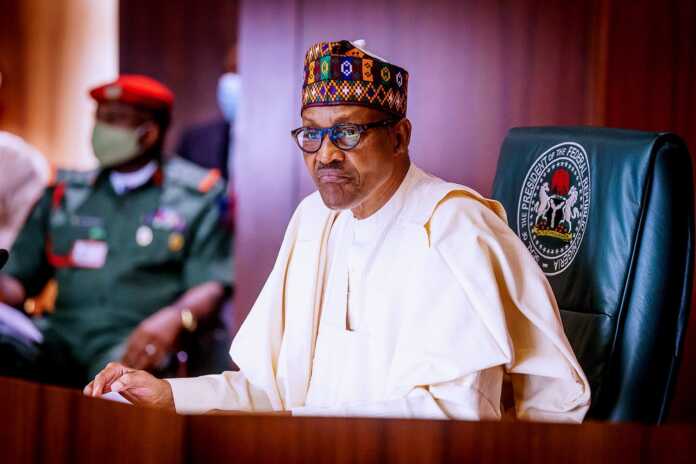 Nigerians on social media have mocked President Buhari over the refusal of Pigeons to fly during the armed forces remembrance on Friday.

President of the Senate, Ahmad Lawan and Speaker of the House of Representatives, Femi Gbajabiamila who graced the event had laid wreaths during the Armed Forces Remembrance Day celebration on Friday in Abuja.

However, when Buhari was called to release the birds, they refused to fly after several trials.

One of the pigeons used in the commemoration of the Armed Forces Remembrance Day when picked up by Buhari and thrown into the air flew back into the cage.

Reacting, some Nigerians said the refusal to fly was a ‘sign that there is no peace in the country.

@IsimonB, “There’s no peace in Nigeria. There’s no progress being made. And there’s no harmony among us. So the pigeons refused to fly. Unbothered and unhinged, Buhari didn’t hesitate to leave the birds. Like he does with Nigeria and Nigerians.”

@Vogunsi, “ I once said that the gods are angry with this administration. You can see the signs already with the pigeons.”

@Morris Monye, “I guarantee you. If it was possible, the DSS would arrest the pigeons for such an affront on the President. But really, is there peace, harmony and security in the land?”

@Lucasscot101, “If the pigeons had flown from his hands, this government would have named it as one of their achievement.“

@Saintnicholas, “Shout out to the pigeon that refused to fly, you are a true Nigerian. Our president needs to know things are not okay”

@Oldcovenant, “Bad omen!!! It’s unheard of that a pigeon inside a cage refused to fly even when the cage was open.Or maybe, they are afraid of kidnappers.”

@dondekojo, “The pigeons said there’s no peace I believe them.”

@Alphabigforreal, “There is a lesson behind this, as pigeon is set free from captive and refused to flee. To me, what it connotes is that it enjoys feeding while in captive or bandage, and what will it be eating if it sets free?
Exactly the same situation Nigerians are today with present govt.”

God will give us a president like Buhari in 2023, says Ebonyi gov