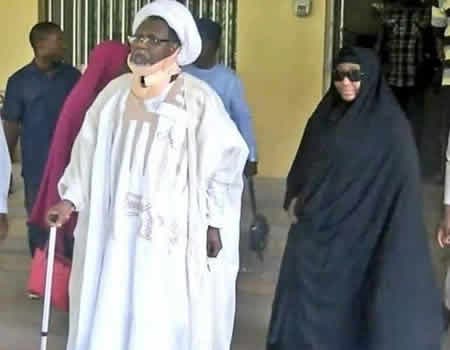 Four years after a Federal High Court granted Sheikh Ibraheem Zakzaky and his wife Zeenatu, freedom, the Islamic Movement in Nigeria (IMN) has said when will the federal government order for their release.

This was even as they described the refusal to release the duo makes it as one of the worst violations of the rule of law in the country.

The assertion was made by the Islamic Movement in Nigeria (IMN) otherwise known as Shiites during a press conference in Kaduna on Saturday.

Speaking on behalf of the IMN, Professor Abdullahi Danladi said, “today marks the fourth anniversary of the expiration of the 45 days caveat within which Buhari-led federal government has been ordered to release our leader Sheikh Ibraheem Zakzaky and his wife, Zeenatu.

According to him, it was a historic judgement delivered by Justice Gabriel Kolawole of the Abuja Division of the Federal High Court on the enforcement of their fundamental Rights.

“Failure to obey that judgement by President Muhammadu Buhari four years on, and counting, makes it one of the worst violations of the rule of law and a monumental abuse of the rights of the couple.

“The learned Jurist had ruled that the continued detention of the duo violates their rights under Section 35 (1) of the Nigerian Constitution and the provisions of the African Charter on Human and Peoples Rights.

Consequently, he ordered the release of the ailing Sheikh and his wife within 45 days of the judgement and that both must be provided with a suitable accommodation and security.

“The court further ordered the payment of N50 million by the federal government to both.

Professor Danladi who is also the chairman of the IMN resource forum, noted that whole delivering the judgment, the Presiding Judge, Justice Gabriel Kolawole held that the continued detention of El-Zakzaky and his wife by state instrumentality was an arbitrary act.

He averred that no extant law within the country’s statutory legal frameworks and external ones subscribed to by the state had allowed anybody to be held against his or her wishes.

He further said that the defense of the respondents was not tenable in law, adding that the state had not justified why the applicant and his wife were held under protective custody as it claimed then.

He said, ‘The judge had warned the government in that judgement that holding the Sheikh for so long amounted to great danger, insisting that “If the applicant dies in custody, which I do not pray for, it could result in many needless deaths.”

However, Buhari has stubbornly kept deaf ears to that and contemptuously continued to detain them. Instead of releasing them, Buhari opted to file bogus charges against the Sheikh and his wife through Kaduna state government.

“Failure to obey court orders by the government is an open invitation to anarchy as observed by a Professor of law, and this is at variance with the democratic principles it claims to be running.

“Before arriving at any decision to release any individual or grant him bail, the courts must have first reviewed the facts presented by all parties and listened to arguments from both the government and such citizens.

“It is therefore totally unacceptable for a government to choose the judgements it would follow and those it will ignore.

“lt is to the glory of Allah that four years into the judgement by the court that Sheikh Zakzaky and his wife be set free, we have never chickened out or relented in demanding for his unconditional release.

“Many international bodies including Amnesty International and the European Union have all urged the Nigerian government to demonstrate respect for the rule of law and release the cleric.

“We will continue to do so irrespective of the government’s use of brutal force against us. We will leave no stone unturned in demanding for his unconditional freedom using all legitimate means at our disposal.

“We therefore once again unequivocally call for his unconditional release, his wife, and all the others still in detention since the Zaria massacre by the Nigerian Army in December, 2015.