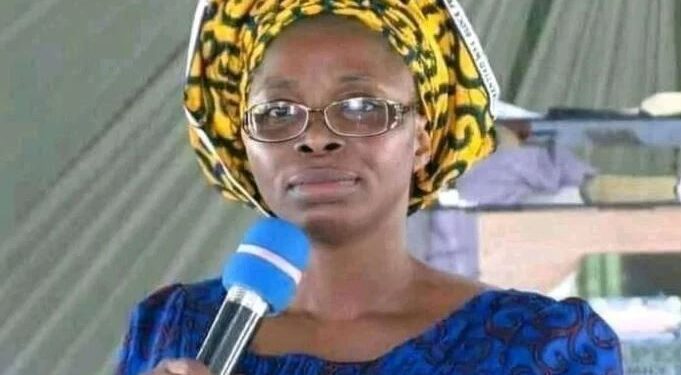 Controversial Nigerian preacher, Funmilayo Adebayo popularly known as Mummy G.O, has reacted to the viral preaching memes about her circulating on social media.

According to her, she knows nothing about the viral memes, and they have only served as means to make her more popular.

Mummy G.O said that many videos about her sermons, saying people will go to hell have been edited and are false.

She speaks in an exclusive interview with BBC published on Sunday.

According to her, people behind those videos started it over eight years ago.

She denied saying people who use MasterCard are going to hell because she herself uses MasterCard.

The evangelist also said getting a Master’s Degree doesn’t mean one would go to hell and she never said such.

Asked if her teaching and convictions about female footballers going to hell fire and others are backed by the scripture, she cited a verse in the Bible.

“Deuteronomy 22:5 says no woman shall wear anything that belongs to a man and no man wears things belonging to a woman. It is inside the same Bible we all read”.

The cleric also revealed during the interview that her preachings have made her receive death threats from other Nigerian pastors.

She said guns have been pointed at her and she has been pursued and spied on by people she doesn’t know, owing to her messages.

She noted after receiving these threats and she did not back down, these set of people came to social media to begin all the blackmail.

Evangelist Adebayo also apologized to artists and superstars her preaching may have touched, noting that she is not trying to bring anybody down.

Speaking on her past when she was ‘on the other side’ before being called, the evangelist said: “I was not a child of God from the beginning but in the other side of the world ‘darkness.’ I was working for the darkness doing all sorts of things in the church, attacking the church, molesting pastors and when God called me out after many preachings and prophecies, I would laugh.

“I responded then saying Jesus said in the Bible ‘I know my people my people know me but me I don’t know Jesus’ even though all my family members are pastors. I told them I don’t believe in Jesus and I’ve arrested a pastor before for telling me God called me.

“When Jesus started talking to me to repent and he wants to use me I destroyed all my power and had to follow him.

She reiterated her preaching during the interview saying that the only way anybody can make heaven is to obey God which she describes as very difficult.

Speaking on her mandate as a spiritualist the evangelist said her work is to prepare people for heaven and the coming of Christ (rapture).

Asked how she feels about being called Mummy GO, she said “that’s a new title and I don’t feel bad. Why will I feel bad?

“People don’t know I exist and now they hear many bad things about me. The wise among them will want to know the truth about me, from there they will know me she said.

On viral clips about her going round on social media, the evangelist said “I have seen plenty of these videos yet I don’t feel bad.

“I don’t feel bad because many of those sharing the clips are not my enemies. Many of them don’t know me and are just flexing on the social media that this is the new trend.

“Many don’t know why those who started sharing the clips are doing it. Many youth just join things that would make them laugh so they are not my enemies at all, they don’t even know me.

While addressing a sermon in which she said footballers will go to hellfire.

She said the Antichrist will be introduced to the world through the football tournament known as World Cup.

“I’m not the only person who said that. We have people from Ghana who also said the same. Even white men said it too. Just go on Google, search for the god of soccer, it will be shown to you. Why didn’t I say the same about other sports? They just want to arouse every soccer lover against me. The event that will introduce the antichrist to the world will come through the World Cup,” she said.