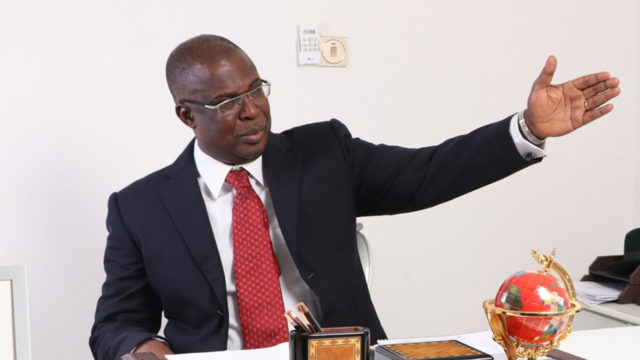 The Advocacy groups under the aegis of the Niger Delta Advocate for Peace and Good Governance, (NDAPGG) and made up of ex-militant leaders and civil activists, led by its National Coordinator, self-styled Gen. Fiawei Pathfinder, Gen. Peres Ayama, Gen. Double Snake also known as Amaebi, Comrade Kingsley also known as Wabu, said the position of Chief Timipre Sylva was to the fact that the multi-national oil companies operating in the region would not be able to relocate their headquarters to the region without putting the necessary measures of template for achieving sustainable lasting peace in the volatile region first.

According to the NDAPGG, the comment of PANDEF was a deliberate attempt to misquote the Minister out of context despite joining hands to secure a sustainable lasting peace in the region which have created a conducive enabling environment for oil companies to relocate to the region and continue their operations, “So, Sylva is more abreast with the fact that stakeholders from the region should work towards achieving that goals for oil companies and business to drive peacefully in the region, because peace is the key to every development and no business could drive in an atmosphere of violence all over the world”.

The NDAPGG, in a statement made available to newsmen in Yenagoa, stated that “The attention of the leadership of the Niger Delta Advocate For Peace And Good Governance and other peace Advocate groups in the region have been drawn to a frivolous, myopic, sentimental, and diminishing statement credited to the Pan Niger Delta Elders Forum, PANDEF that the Minister for State of Petroleum Resources, Chief Timipre Slyva, is against the relocation of the Oil Multinationals to the region.”

“We are aware and know that Sylva is a man of integrity and true patriot of the Niger Delta region, astute gentle man and elder statesman who has sacrificed a lot to achieve the needed peace and Development in the region in many areas, and he is still deeply involved in giving a sense of belonging to the people of the Niger Delta as a elder statesman like any other persons. It is rather unfortunate, to hear the Pan Niger Delta Elders Forum, PANDEF, who claimed to be Agitating for peace and sustainable development for the region, to rise up and malign the Minister and attempt to bully over his position on the relocation of oil multinationals”.

“Why would they try to bully him for speaking the truth about the skeleton that volatile situation in most areas in the region wish does not encourage multi-national oil companies to just change their minds overnight to relocate their headquarters to the region. But if all of us join hands together as stakeholders to achieve the needed lasting peace in the region then they can conveniently move their headquarters to the region and their business, this was the actual meaning of what the minister of petroleum meant by his statement during the visit of Non Violent Agitators Group of Niger Delta, where the group honored him with Worthy Peace Ambassador of Niger Delta Award because of his outstanding track record of impact made on the people of the region.”

“We thought that members of PANDEF, who claimed to be elders of the region should know better that it is not proper for relocation of oil companies to just relocate to the region now without addressed the key critical issues of achieving a sustainable lasting peace in the region first as it concern the well-being of the people, which would provide the enabling environment for these multinational oil companies to operate without fear or doubt when they relocate”.

“The Elders of PANDEF have also failed to understand what the Minister said while charging Niger Deltans, especially, young people who are either ex-agitators or stakeholders from the region to take it as our responsibility to preach and practice peace and do everything humanly possible to make sure peace is sustained and achieved in the creeks of the region, which could be the only way out to attract these IOCs to relocate to the region. We decry the comment of PANDEF because the predicament and harrowing experience of underdevelopment in the region today is not caused by the president Muhammadu Buhari led APC federal government rather it was caused by some of them who were in various highly place elective positions or by appointment in governance at the federal and state level but failed to be patriots at that time to champion the underdevelopment of the region but rather were wining and dining with the enemies of the region”.

“They failed woefully and are the real enemies we have in the region because they had the opportunity and resource to influence and attract development to the region but preferred to focus on themselves and cronies at the detriment of the region but today are coming out together to form a group called PANDEF in a pretense as if they are so concerned about the Developmental affairs of the long neglected emancipated people in the region they actually left to suffer in the penury while they and their families with their corrupt cronies traveled abroad or lived in other people’s cities they felt that is well developed and better than their own villages”.

“Let them come out in public and tell the world and Niger Deltans what they have done as individuals to add value to the lives of Niger Deltans and the region if they would not be stoned to the wall and laughed at them, that is why some of them cannot come back home and live peacefully, rather they prefer moving around and reside in Abuja, Lagos and Dubai but now castigating a worthy son from the region who is the Minister of Petroleum Resources that has dedicated his time and resources to better the lives of the oil producing Communities in the region, and presently has attracted more socio-economic developmental projects to the region through the ministry of petroleum resources than any other Minister that have held that position from the region ever appointed”.

“It is on record that the Minister of State for Petroleum Resources, Chief Timipre Sylva, has done a lot towards the sustainable peace that is existing in the region today and as we speak there are a lot of projects ongoing in the region that has created job opportunities and given massive employment to the youths in Bayelsa State and other States in the South-South region, and that has drastically reduced youth restiveness and gradually bringing down the issue of carrying up arms against the state”.

“Instead of PANDEF embarking on a failed journey of frivolity against the Minister, they should have commended the Minister for the good initiatives, pro-activeness, commitment and dedication to the development of the region tirelessly for the enormous job he is doing to change the narrative in the region they are now picking holes and calling the Minister unwarranted names in other to distract him from the focus good job the minister his doing in the region”.

“Without apology, the members of PANDEF lack the temerity and the moral standing to attack and point fingers at the Minister because we are fully aware of the allege banditry games of hostile ways some people played and are still playing because they were rather busy allocating contract in billions of Naira and Dollars to themselves and their cronies, and never executed any of those contacts to develop the region and now that they don’t have such opportunity that is the reason of this attacks and pointing fingers is coming from. Let them keep their mouths shut! They are our problem and enemies to the development of the region”.

“It is really sad that Ikwerre Progressive Union or whatever they call themselves will now also join there co group of fellows that flock together and have the right to go to the media to disparage the Minister. This is uncalled for and unacceptable. It is not a civilized thing to do as an ethnic body, if they are reasonable progressive ethnic group as they call themselves”.

“At this juncture, we as a group made up of ex Militants leaders, peace ambassadors and as stakeholders from the region will not fold our hands to tolerate and allow such unwarranted diminishing malicious bulling statements from such disgruntled corrupt minded elements who are unreasonable fellows to point fingers to dent the Image of the minister of petroleum just to discredit the good works he is doing in the region as the minister of State for Petroleum. And as a group, we condemned in totality the unwarranted myopic sentimental shameless statements made against the Minister by the so called PANDEF group and their co group of fellows called Ikwere Progressive Union outcry will not be tolerated next time, enough of all this nonsensical meaningless blackmailing unjustifiable statements the group warned”.

“If they refuse to withdraw from their evil devilish diminishing and inhuman tendencies of pointing fingers and constantly attacking the Minister of Petroleum, and other Niger Delta sons and daughters who are holding one or two offices under the President Muhammadu Buhari-led APC administration at the federal level, we would be forced to declare war against them and tag them as enemies to the peace and development of our region”, it added.