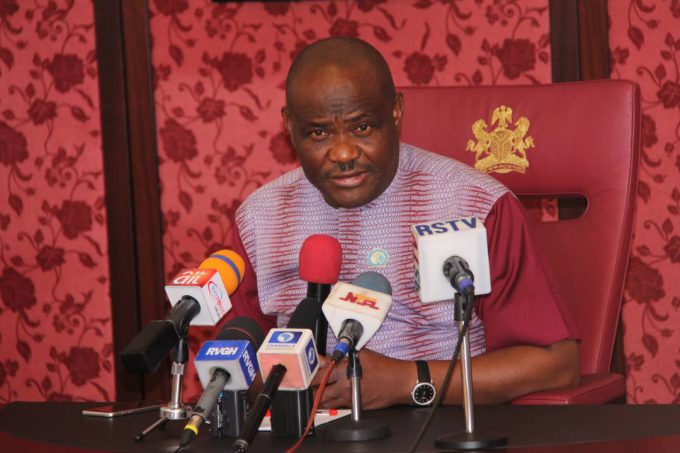 A Pan Niger Delta group under the aegis of MOSIEND has urged the Rivers State Governor Chief Barr Nyesom Wike to resist the temptation of imposing his successor on Rivers People, saying the Governor should allow Rivers People choose their Governor in 2023 through the ballot.

MOSIEND also enjoined Governor Wike not to entertain any fears against imaginary or presumptuous political forces to victimize him after he leaves office on May 29, 2023.

The group insists that the Rivers State Governor has nothing to worry about so long as he remains upright, prudent, transparent and unbiased in his stewardship of the oil rich State.

The National Secretary of MOSIEND, Amb. Amain Winston Cottrell, in a statement forwarded to leadership via electronic mail, said Governor Wike’s courage and boldness in speaking truth to power on crucial National developments should not be a reason for his critics and detractors to hatch an evil plot against him when he eventually leaves office.

The MOSIEND National scribe encouraged the Governor to remain resolute and firm in the laudable political ideologies he subscribes to, stressing that no ill intention against him shall prevail.

“Honestly, it is not possible for anyone to occupy that exalted office for eight years without having a score or two to settle with one person or a group of persons, these things are normal in leadership, particularly in our peculiar political environment. It’s even more prevalent in an heterogeneous state such as Rivers, with diverse ethno political and economic interest”, Cottrell said.

Amb. Amain however used the opportunity of the media interaction to draw the attention of Governor Wike to some of the concerns put forward by people of the State after his remarks on the travails of Senator Owelle Rochas Okorocha, who is believed to be going through perceived political persecution by suspected political enemies.

” Gov Wike surprised us by that singular statement, I mean we were all witnesses to Okorocha’s desperate bid to impose his son in-law against the popular wishes of the people, which pitched him against the people of Imo State ahead of the 2019 Imo elections, this habitual habit of anointing a successor at all cost, was one of the undermining factors that worked against Okorocha, who still remains bitter that his intention to make governance in Imo State a family affair did not come to fruition. So, we are not surprised about his current travails which we believe is self induced.

Going forward, Gov Wike still have two years ahead to do what is right , apart from infrastructural development, with particular reference to the road constructions which is commendable and a major selling point of his administration, other areas have suffered a huge setback and needs his prompt and timely intervention. For instance, the Governor needs to also give priority attention to critical areas of development such as empowerment, unemployment , insecurity, healthcare delivery and social security”

MOSIEND reminded the Governor of the transient nature of political power, noting that one’s administration will be remembered and appraised by how he is able to fulfil campaign promises based on the amount of resources accrued to the State under the administration and how well those resources were deployed in the interest and development of the State.

Cotterel also lamented what he calls the subtle strangulation of hitherto functional agencies and Programmes in Rivers State such as RSSDA, TIMARIV, Land and waterway security surveillance and Amnesty programme for repentant cultists.

He said scrapping these agencies and Programmes, which provided job opportunities for Rivers sons and daughters without creating an alternative, has created hardship and socioeconomic setback, even for his teeming supporters.

The MOSIEND National Secretary said the greatest mistake Governor Wike would make as governor of Rivers State is to go the way of Rochas Okorocha by attempting to impose a candidate on Rivers People in the next Governorship election. He advised Governor Wike to factor in the principles of fairness and equity in the politics of 2023, saying the top political job in Rivers State should not elude the Riverine or Ogoni areas of the State.

He commended plans by the Governor to move from the government house and operate from his personal residence, noting that such a move has the potential of reducing the cost of governance.

“We commend the decision of the Governor for not getting used to the Government House, by planning his exit strategy of gradually relocating to his beautiful and magnificent abode, at least, it will cut cost of running the Government House when he is there and such monies will be applied to other economic yielding ventures for the state. Above all, the Governor should evaluate his relationship with the youths as they are unhappy about the way he abandoned them immediately after winning the 2019 reelections bid. Unlike Okorocha, Wike has the opportunity to go back to his normal self of empathising and caring for the downtrodden Rivers people who stood by him and supported him all through 2019 elections”, Cotterel adds.

He urged Gov Wike not to be preoccupied by who will be ganging up against him after he leaves office, rather, he should strive to put in his best to improve his performance outside of infrastructure and carry every body along by giving true leadership which he is known for. “Governor Wike should avoid listening to sycophants and praise singers as they will run away the moment he leaves office, just as Rochas cannot find any of such people around him today”

I Would Have Resigned If I Was In Pantami’s Situation – Gov. Wike

I know they will come for me after office, l’m prepared – Wike

Why I took my COVID-19 vaccine quietly – Wike