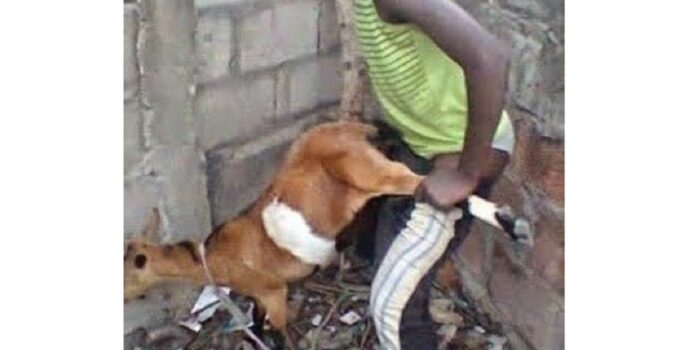 The Jigawa state police command has arrested a 25-year-old man for allegedly having sexual intercourse with a goat in the Gwaram LGA of the state.

According to NAN, Lawan Shiisu, the command’s public relations officer, broke the news in a statement on Friday.

Shiisu said the suspect — whose name was not disclosed — was arrested at about 1 am by police operatives who were on patrol in Gwaram town.

The police spokesman said the suspect, a resident of Kunnadi quarters, was arrested by the patrol team while allegedly indulging in the bestial act.

“At about 0100hrs, police from Gwaram Divisional Headquarters, while on patrol in Gwaram and its environs, arrested one 25-year-old resident of Kunnadi quarters, while having intercourse with a goat,” he said.

The spokesman added that investigation into the case was ongoing after which the suspect would be charged to court.

Bestiality is a crime in Nigeria. According to section 214 of the Nigerian criminal code act, the offence is punishable by a jail term of up to seven years.

The penal code act, which applies in northern parts of the country, also prohibits bestial acts.

“Whoever has carnal intercourse against the order of nature with a man, woman or any animal, shall be punished with imprisonment for a term of which may extend to fourteen years and shall also be liable to fine,” it read.