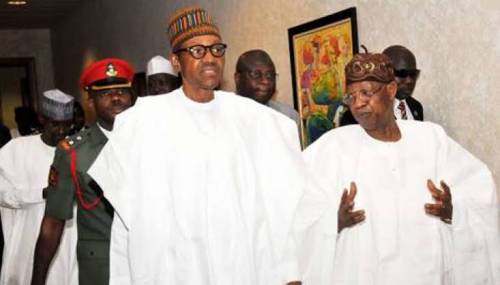 On Saturday morning between 11 am and 12 pm, as Nigerians woke up to the reality of a Twitter ban, and downloading Virtual Private Networks (VPNs) to access Twitter, the Nigerian government, through the office of the Presidency, reached out to the Cyberspace Administration of China (CAC) to discuss plans to build an internet firewall, FIJ reports.

The government officials present at the meeting include Ibrahim Gambari, the Chief of Staff to the President, and Lai Mohammed, Minister of Information and Culture.

The internet firewall is a way of having a separate network for the Nigerian Internet that will give the government control over social media platforms such as Twitter and Facebook.

This is similar to the internet filtering system China operates, called the Great Firewall.

Meanwhile, SaharaReporters learnt that Nigeria loses over N2 billion to Twitter shutdown in the country on a daily basis.

The NetBlocks Cost of Shutdown Tool (Cost) estimates the economic impact of an Internet disruption, mobile data blackout or app restriction using indicators from the World Bank, ITU, Eurostat and US. Census.

Meanwhile, the estimate is for one day, meaning the country has lost over N4 billion since the ban on Friday.

Nigeria’s unemployment rate increased to the second highest on a global list of countries monitored by Bloomberg recently.

The jobless rate in Nigeria rose to 33.3% in the three months through December, according to a report published by the National Bureau of Statistics on March 15.

Experts have noted that a good number of Nigeria’s youth population earn their livelihood through Twitter and that such incomes will be affected by ban. will be lost no thanks to the ban.

According to CFR, “the Great Firewall, is the centre of the government’s online censorship and surveillance effort. Its methods include bandwidth throttling, keyword filtering, and blocking access to certain websites.”

The Reporters Without Borders states that the firewall makes large-scale use of Deep Packet Inspection technology, an advanced method of examining and managing network traffic. The Nigerian government seeks to establish the Nigerian Internet, which it will also control likewise.

A digital security expert told the newspaper that China is the only country that deploys total Deep Packet Inspection over its cyberspace. The technology involves making use of lots of manpower.

The internet firewall will also give the Nigerian government power to block VPN, which many Nigerians are using to access Twitter. The CAC is the central internet regulator, censor, oversight and control agency for China and answers to the Central Cyberspace Affairs Commission, headed by Xi Jinping, China’s President.

Since its existence, the CAC, which also gives approval to data by Chinese companies outside of China, regulates usernames on the Chinese Internet, licences news information services, and bans comments that “harm national security” or “harm the nations honour interest”.

Wall Street Journal reported that People.cn, the online arm of the Communist Party’s People’s Daily newspaper, offers content moderation as a service. The chairman of People.cn predicted that censorship in China will grow to a $70 billion industry.

The Nigerian government has in the past few years sought a way to control freedom of expression online. Towards the end of 2015, the Frivolous Petition Bill targeting online and print media as well as regulating social media posts was introduced into the Senate just 10 months after Buhari’s ascent to power.

In 2019, lawmakers introduced two bills: the National Commission for the Prohibition of Hate Speech bill and the Protection from Internet Falsehood and Manipulation and other Related Offences bill, prompting public outcry that meant they were not passed into law.

FIJ learnt that Bellingcat was approached to give OSINT training to the Nigerian intelligence community to develop local capacity for Open Source Investigation.

The Nigerian government had sold the angle of national security and fighting terrorism to Bellingcat, but that wasn’t at the top of the government’s priority. Bellingcat later discovered that the purpose of the training was to hunt down civilians and those who spoke negatively against the government, and not Boko Haram terrorists as claimed by the Nigerian government. The terrorists, in this case, were pro-Biafra supporters. Bellingcat has been reported to say what the US intelligence can’t, which includes exposing Russian activities.

“The government needed a legal framework through which it could carry out its actions,” he said.

“That legal framework would serve as a justification for their actions. Mostly, the rhetoric the government uses, including Friday’s suspension of Twitter, was around Nigeria’s unity and national security,” FIJ quoted a source as saying.

A 2020 report titled Running in Circles Uncovering the Clients of Cyberespionage Firm Circles by The Citizen Lab of the University of Toronto showed that Nigeria’s Defence Intelligence Agency had recruited the services of Circles in 2015 and 2017 to spy on its citizens and track down government critics.

Freedom House, a US-based advocacy group, revealed that the surveillance projects such as Stranvisky Project 2 still received allocation in the 2019 and 2020 budget proposals.

The Citizen Lab, meanwhile, reported that Circles, a surveillance firm, exploits weaknesses in the global mobile phone system to snoop on calls, texts, and the location of phones around the globe. Circles relies on inside sources and open sources intelligence and customers can purchase a system that they connect to local telecommunications companies.

A 2016 investigation showed that in 2010, Rotimi Amaechi, the former Governor of Rivers State, was the first government official to make contact with Circles to deliver internet surveillance equipment. Though the deal fell through, it highlighted the direction Nigeria was going.

Internet shutdown has become a tool that African leaders are more inclined to exercise during protests and elections. In 2017 in Cameroon, for example, the Anglophone regions had internet shutdown for over three months, and it was only restored on the orders of their sit-tight President, Paul Biya.