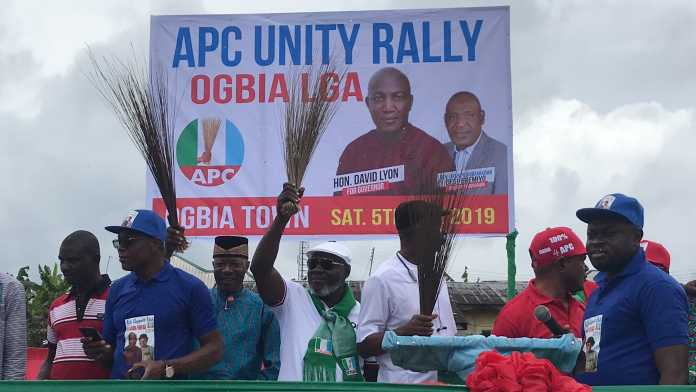 …As over 1000 PDP faithfuls defect to APC

Kinsmen of former President Goodluck Jonathan have vowed to work for the victory of the All Progressives Congress (APC) in Ogbia local government by giving hundred percent votes in the November 16 governorship poll.

This was the resolution of various APC chieftains who spoke at a rally tagged: “Ogbia Unity Rally”  organized by the  Ogbia chapter of the All progressive Congress (APC) in Ogbia Town to galvanize support for the party and unite the people together.

The Ogbia local government chairman of APC, Hon. Abi Morris while welcoming the over 1000  decampees from the People Democratic party (PDP), to the All Progressive Congress APC, said expressed happiness the his kinsmen have come out of darkness to light by their decision to join the APC.

Morris, noted that those who have decamped today have seen that there is no hope for the PDP and enjoined them to work to ensure a landslide victory for the APC in the forthcoming poll.

He said that “there is only one thing that the  Ogbia people are known  for and that is unity,  and today we havw seen that unity being displayed by the mammoth crowd at this rally which is a sign that the Ogbia Kingdom is tired of the PDP and its   bags of deceit and lies”

It is a thing of shame that we have been reduced to a laughing stock because of political deferences. And today the APC family  has come to rekindle that spirit of unity and hope in us.”

It looks like a dream to me when  the Tour-Orua born politician  boasted ,that the brother is no longer there, it is  only the hood that is there. The brother has been taken away. And today you can see the mammoth crowd that have grace this event is a testament that we are once again united as brothers,” he said.

A chieftain of PDP in Ogbia who recently defected to the APC, Hon Abedenigo Don-Evarada “we have come to the APC with our spirit, strength and mind to join forces  to work for APC in Ogbia local government and the state level because APC stand for progress and peace that is why we left  the PDP and join the APC . Today as I speak to you Ogbia is for APC, the only party that can take us to next level.

Evarada stated that  during the campaign of Seriake Dickson,  he promised to build our roads and to give us water but nothing has been done to the ogbia people, stressing that with the APC  rhe Ogbia  people have every cause to celebrate because the party that will take us to the next level will take over Creek Haven come February 2030.

Hon Maxwell Oko, the Executive Director designate, Finance and Administration of the NDDC said that the APC stand ? chances to win election comes November 16  because the party is united both at the national,  state and the local government level.

He added that the APC treats every body both old and new members as first class citizens because we are working in line with our party constitution andv guidelines that unites us as a party.

The candidate representative of the APC governorship candidate, Hon Festus Doumiebi thanked the people of ogbia for coming out en mass to support David Lyon, pointing out as people who have a common goal of taking over the leadership of the state the spirit of unity, prayers and hardworking should be our watchword till victory is achieved.

Policeman Spotted Defecating On Roadside After Getting Drunk (Photos)