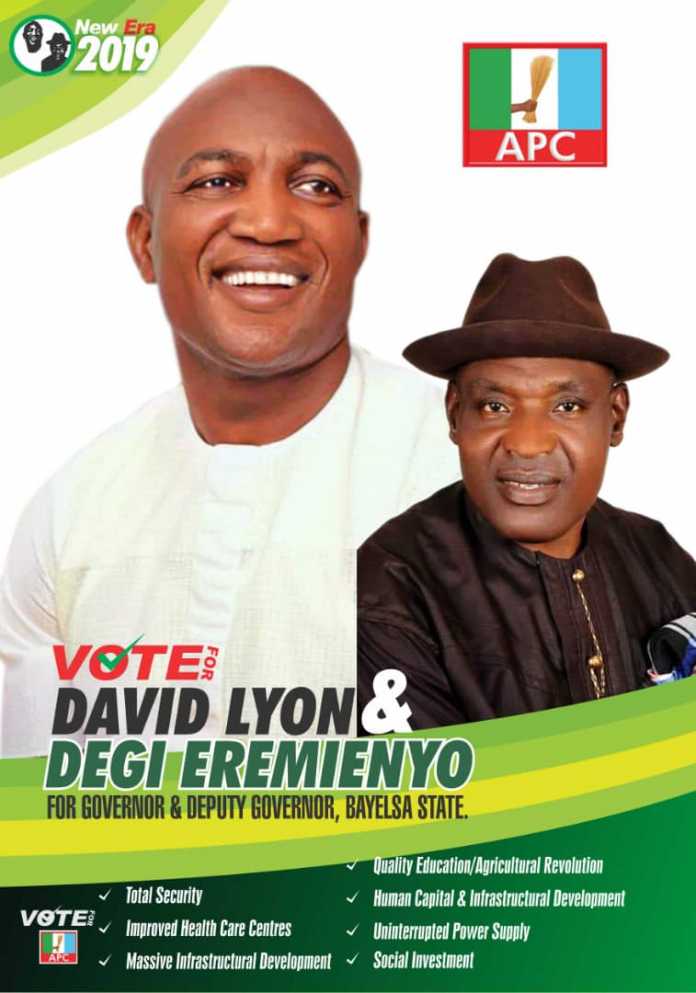 The governorship candidate of APC for the November 16 gubernatorial election in Bayelsa State, Chief David Lyon said, he will win the November 16 election with a landslide victory against the bogus empty euphoria claims of the PDP that they are on ground in the state.

Responding to a Statement credited to the Governor of Bayelsa State, Hon. Henry Seriake Dickson released by his Chief Press Secretary, Mr Fidelis Soriwei on Tuesday 8th, October, 2019, while inaugurating the Peoples Democratic Party Grassroots Movement from Brass and Yenagoa Local Governments of the State.

According to Hon. Dickson, APC lacks the structures and wherewithal to win governorship election in Bayelsa State. In a swift reaction to the Governor’s usual outburst of castigating David Lyon and our indomitable leader, Chief Timipre Sylva, the Minister of Petroleum, David Lyon said, Dickson should concern himself with how he will pay civil servants and pensioners whom he has impoverished in the state for so long, and stop meddling in APC affairs.

We even know that Dickson is behind most of the litigations in Bayelsa State APC. But we are appealing to Dickson to thread with caution, because he will soon hand over to the APC government come 14/02/2020 so that we could give him political asylum because he will soon be in the ranks of a former Governor.

In a press statement signed by David Lyon Media adviser,   Gift Ebiki, Governor Dickson should not be clouded under  emotions that his surrogate candidate Douye Diri can win election in Bayelsa State. It is on record that Douye Diri could not win the PDP Party primary election in his Local Government Area, not to talk of a general election in Bayelsa  State. Dickson should know that the APC came out very strong in the last February elections under his watch ,and APC won the presidential election and other state and National Assembly elections in Bayelsa State.

It is unfortunate that our Governor has not realized  that he is a lonely man in a lonely forest because the entire PDP National Working Committee and the PDP Governor’s have jettisoned him, this became clear that no National Executive officer of the PDP came for the flag-off of his candidate, Douye Diri, the only person that came is Chief Emma Ogidi whose maternal home is from Ogbia Local Government Area of Bayelsa state, that is always at the beck and call of Governor Dickson.

Governor Dickson today is a replica of Nebuchadnezzar and Goliath of the Bible who refused to listen to the voice of God that ended in the hands of God’s anger. Today, God has chosen Chief David Lion as the Lyon of the tribe of Bayelsa to correct the wrong doings of the 8 years misrule of the PDP led government.

The story of David and Goliath will replicate in the November 16 Governorship election. We advise Dickson to pay up every salary arrears and pensions and gratuities owed to Bayelsans before his handover day and not to be giving proxy letters of appointment without portfolios that is so pitiable and ridiculous of a state government.

Health News SAINT MIENPAMO - April 8, 2020 - 4:52 pm
0
The Bayelsa state Government as said that Churches with large congregation to hold services with not more than 50 members at a...