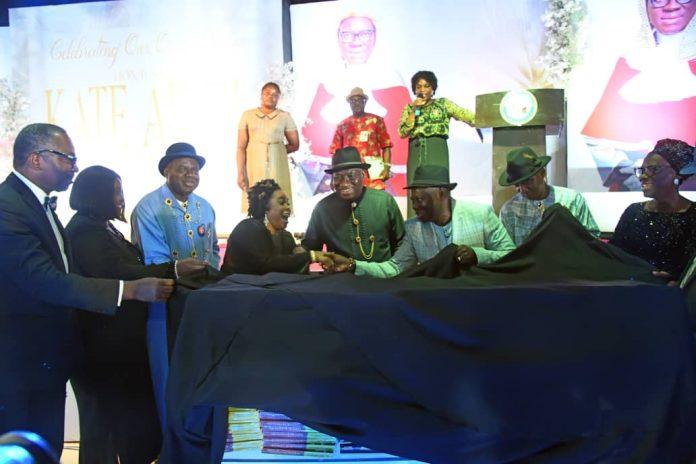 Dr. Jonathan gave the admonition on Friday during the book presentation/reception that culminated week-long activities marking the retirement of the Bayelsa State Chief Judge, Justice Kate Abiri, in Yenagoa, the state capital.

The former president acknowledged the critical role Justice Abiri played when she swore in the Rivers State governor, Nyesom Wike, thus averting a constitutional crisis and advised politicians not to be blinded by the power they wield.

Jonathan equally cautioned judicial officers to strive to be impartial and courageous in upholding the rule of law, which he noted was significant in the delivery of justice.

His words: “I advise politicians that while in office, let us not try to blackmail the judiciary because it is conservative. When we get political power, we get so blinded. Politicians should know that society is changing.

“Today, we are celebrating our retiring Chief Judge because she has served meritoriously. In 2015, she left Bayelsa for Rivers to perform the swearing-in of the governor thereby averting anarchy. It appears that the judicial arm is more functional than the executive.”

In his remarks, the Bayelsa governor, Senator Douye Diri, hailed Justice Abiri for her outstanding achievements, noting that during her 15-year term as Chief Judge, she swore in three governors in Bayelsa and one in Rivers.

Governor Diri described Abiri as a legal icon, who rendered unblemished and meritorious service in three decades of legal practice.

He said the state would still require her services due to her commitment and wealth of experience.

Chairman of the occasion and chairman of the Body of Benchers, Chief Wole Olanikpekun (SAN), lauded Abiri as an elegant, brilliant and hardworking jurist, who represents the very best in the legal profession.

Chief Olanikpekun also commended the Diri administration for supporting the judiciary, expressing belief that in a few days a substantive CJ would be appointed for the state judiciary.

Responding, Justice Kate Abiri expressed appreciation to the Bayelsa governor for his support and encouragement.

Three books were unveiled at the event, which include “Kate Abiri: Footprints on the Bench,” “Judges and Judging in Nigeria” and “Bayelsa State Law Reports: Volume One.”

The chief launcher and president of the De Wayles Group, High Chief Emonena Wayles Egukawhore, donated the sum of $100,000 and N20 million for the books while the Rivers State government donated N200 million, the Bayelsa government gave N250 million and Chief Gesi Asamowei N5 million among other donations.

Earlier, at a special parade and valedictory court session in her honour, different speakers extolled her virtues and her contribution to the growth of the judiciary in Nigeria.

Governor Diri said her retirement was the beginning of a fresh chapter for the renowned judge, who displayed exemplary character and attracted dignity to the Bench.

He noted that Abiri was soft-spoken and humble but also a personality that carried the full weight of the law, with a balanced approach to leadership.

He assured that his government will continue to respect the rule of law as well as partner the judiciary in delivering the dividends of democracy to all Bayelsans.

Speaking on behalf of the Senior Advocates of Nigeria, Chief Thompson Okpoko stated that Abiri served well in honour and character, having witnessed her emergence as the third substantive CJ of Bayelsa.

Chief Okpoko said lawyers in the state attest to the fact that she exhibited the true qualities required of a judge while presiding over cases as well as in the administration of justice.

Also, the Chief Judge of Zamfara State and Chairman, Body of Chief Judges, Justice Lulu Aliyu, stated that Abiri had great qualities in temperament, legal knowledge and its appreciation

Responding, Justice Abiri expressed appreciation particularly to Governor Diri for making her experience under his administration seamless, owing to the financial autonomy introduced as governor of the state.

She stressed that the state judiciary now executes quality projects without external supervision or stifling of funds.