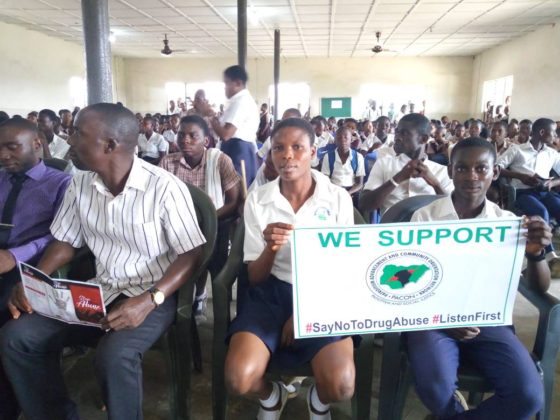 #NaijaLiveTv
In commemoration of this year’s International Day Against Drug Abuse and Illicit Trafficking as declared by the United Nations Office of Drug and Crime, the Patriotism Advancement and Community Orientation Network (PACON) organized a sensitization programme for secondary schools and community Leaders in Bayelsa state.
PACON, in partnership with sister organizations such as the Izonfest Development Foundation, Young Pharmaceutical Club as well as the National Drug Law Enforcement Agency and Ministry of Education, Bayelsa State held a one day town hall meeting with community leaders, clerics and school children with the theme “Listen First”.
PACON says the meeting is to create awareness on the significance of the date (26th June) world wide, as a day specially set aside for marking the efforts by the international community to address the rising concerns of drug abuse.
The event which took place at the Akenfa community town hall saw the attendance of over 300 school children. It was an interactive session between the groups and students of community secondary school, Akenfa-Epie
Speaking at the event, the co-convener of PACON, Mr. Debekeme Powedei says drug abuse has become an epidemic in the state that needs serious awareness and sensitization campaign to halt. “The Ministry of Health and Information have a crucial role to play in the fight against drug abuse. It is an enabler to the terrors unleashed by cultists in our communities.

“We need a different approach as to how we see drug addicts. They are sick people and should be treated as such, with love and compassion. Contrary to shared opinion among young people, it is not cool to be sick.” He said
Also, Mr. Henry Uzzi, from the office of community awareness, National Drug Law Enforcement Agency admonished the students on the dangers of drug abuse, the various forms of drugs commonly abused and the method in which they are abused. He warned students on the implications of being caught up in drug abuse, and the dangers it poses to their future.
Mr. Uzzi emphasized that the essence of this year’s theme “LISTEN FIRST”, is to encourage various stakeholders, especially parents to pay more attention to their children because more can be achieved if information exchange is encouraged especially with regards to addressing the prevailing challenges surrounding illicit drug abuse in the world today stressing that open communication with children will help in monitoring their activities.
He further decried the proliferation of illicit drugs in Bayelsa state with cannabis sativa being the most circulated. “Only recently, the National Drug Law Enforcement Agency (NDLEA) arrests 89 suspects and seizes 73.779 kilogrammes of different classes of illicit drugs in the first quarter of 2018 alone with Cannabis Sativa accounted for the highest drug abused with a total of 62.093kg” He said.
In the same vein, the President of Young Pharmaceutical Club of Bayelsa state, Pharm Immanuya Waneemi, while highlighting some of the misconceptions regarding illicit drug use by youths, pointed out that most youths are deceived by fairy tale benefits that are supposedly derivable with the use of such drugs and substances. He pointed out that it was all a lie, and no one who got in ever got those benefits.
Immanuya advised young people to stay away at all cost from abuse of opioid, because they are very addictive and could rob youths of their future.
He added that the whole world through the United Nations cannot be wrong in taking conscious steps to end drug abuse, which includes setting aside a day for that purpose.
According to Aniso Abraham esq, a member of PACON and President of Izonfest Development Foundation, “every effort aimed at building the youths is a step in the right direction“.
He urged organizations to collaborate more in promoting youth friendly programmes that will help to shape them into becoming better members of the society in future.
“There is need for stakeholders to ensure that young people stay off drug abuse and join the international community to ensure they use this date as a way of reflections every year.” He said.
On how to end drug abuse in secondary schools, Master Wariebi Tamuno, a student of CSS Akenfa-Epie highlighted some of the challenges faced by the schools and its students, especially lack of perimeter fencing around the schools.
Other dignitaries present include Mr. Keku Okobakiye (Principal, CSS Akenfa-Epie), Mr. Chima Jackson (Youth President, Akenfa-Epie Community), Mrs. Oyin-Doubara Mumeya Wilson (Secretary, Akenfa Women Council)