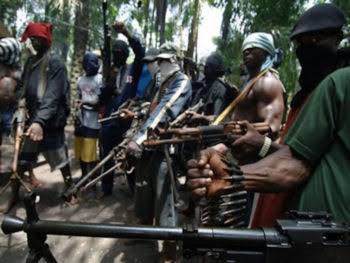 Militant leaders from the Nine States of the Niger Delta region have expressed reservation over the recently signed 2018 budget ,saying the silence of the National Assembly members from the region over the reduction in the budgetary provision for projects in the region is poor and vexatious.

The angry militants,under the aegis of the Reformed Niger Delta Avengers (RNDA) and a coalition of nine militant groups,accuses them of complicity, ineptitude, foolishness,non committed approach and dumbness that led to the alleged reduction of funding allocated for key infrastructural development projects in the 2018 budget recently signed by President Muhammadu Buhari.

The angry militant groups, in a statement issued via email to newsmen yesterday in Yenagoa, threatened to adeal decisively with them while their properties scattered across the Niger Delta region will receive a dose of our ravaging dynamites explosion.

The RNDA, at a meeting held at the Benin River in Egbema axis of Delta State to appraise the budgetary provisions for various projects in the Niger Delta region and to justify if it’s commensurate with the amount of wealth gotten from the region’s crude oil, noted that the National Assembly members have not been able to attract projects and would sit down and fold their hands in the green and red chambers and superintendent over reduction of funding key projects attracted to the development of the long neglected region by others .

Leader of the RNDA Major General Johnmark Ezonebi,AKA (OBAMA) said it was shameful and abysmal failure on the part of our legislators in the national assembly to sit down and endorse this injustice done to the people of the region when the President had already allocated funds for such projects with direct positive impact on the people.

“We have directed all our striking force units across the entire Niger Delta region to monitor their movements and go after their properties because it’s our money that they use to acquire such properties”.

“It is totally unacceptable in this era as it will no longer be condoned for our elected representatives to pursue their personal interest to the detriment of the region’s development as was clearly displayed by former President Goodluck Jonathan in his epileptic six years reign while under his blind watch allowed Orubebe, Diezani and courts to milk the wealth of the region dry without contributing any single project to the region.”

“We were totally taken aback over the reduction of funds allocated to the Nigerian Maritime University, Okerenko,this was one project that we sacrificed our lives in the creek to fought for,the second Niger bridge, the East West road which former president Goodluck Jornathan and his corrupt PDP Government could not complete that is cuts across all the Niger Delta States among other critical projects by the National Assembly when the President had provided enough funds for such projects describing the action of the National Assembly members as setting the tone for serious agitations that may lead to another uprising of militancy in the region.”

The RNDA said the Presidents vituperations during the signing of the budget stated the obvious that he was prepared to address the underdevelopmental challengs facing the Niger Delta region but our own people were slowing the process.

The RNDA Leader commended the efforts of the APC led federal government as exemplified by President Buhari in the budget submitted to the National Assembly as he provided funds for those critical projects in the region which the six years misrule of the Jonathan administration could not even achieve any single project to the people of the region.

RNDA thanked President Muhammadu Buhari for his efforts to fund the Nigerian Maritime University, Okerenko, the recent approval of 13bn for the dredging of the Escracos/Warri seaport to enable bigger vessels which would also open up the area for more economic activities, the East West road and the implementation of the Ogoni clean up exercise.

“We want to urged President Buhari to as a matter of urgency approve the release of the licences for the ten modular refineries,release of the gas penalty funds for oil producing communities in the creek as well as approval of the pipeline surveillance job to be handled by HOSTCOM while the jobs should be given to the agitating militant groups in the creek for the interest of peace”

Ex-agitators beg companies to return to Niger Delta – Says, ‘Days of violence over’