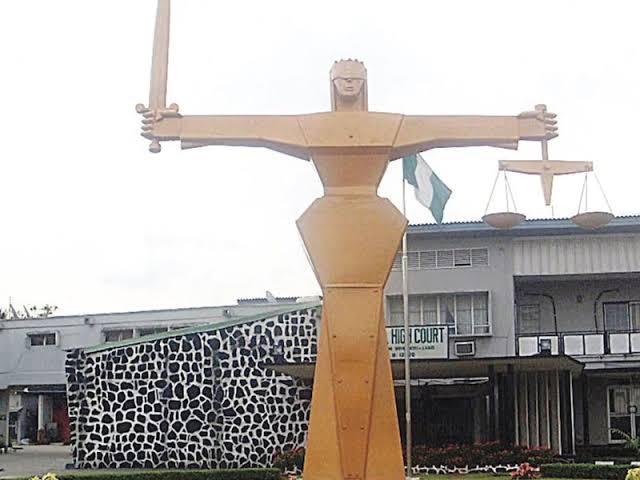 The Niger Delta Integrity Group, NDIG has viewed with utter dismay the extent to which state governors in Nigeria use High Court Judges to pursue their selfish interests.

He lamented that although constitutionally, the judiciary is an independent arm of government; all too often state governors subject them to unnecessary political pressure through financial inducements and other gratifications. By the end of the day, they become victims of a corrupt political system enmeshed in executive highhandedness.

Making reference to the matter in High Court 3 presided by Justice Cocodia, he noted that the way and manner the Honourable Justice is carrying on smacks of conspiracy with the Executive to dissolve the APC Exco. This has portrayed the Honorable Justice as an interested party who may go down as the ‘Man Friday’ of the State governor.

I was at one of the sittings and I had to ask questions around the matter. The storyline is clear; one Osom Blankson, an aggrieved APC member who is a known contractor with Bayelsa State SUBEB, went to court seeking the nullification of the APC state-wide congresses.

“I am also told how Governor Diri sponsored his 10th year marriage anniversary, which Osom enjoyed with pomp and pageantry. The said Osom Blankson from Famgbe community, openly supports the PDP candidate of Yenagoa constituency 1.”

“He is a PDP man wearing the garb of APC. It is a classic case of the hand of Esau and the voice of Jacob. It is therefore not surprising that the matter was taken to High Court 3, presided over by the brother of Governor Diri’s SA political, Mr. Collins Cocodia to do the bidding of Creek Haven. It is on this basis that there is every reasonable reason to believe that Justice Cocodia of High Court 3 of is an interested party to the matter”.

Already, the Integrity Group is in the process of submitting a petition to the NJC on the matter. If the Honorable Justice fails to excuse himself from trying the matter, in accordance with the principle of nemo judex in causa sua, Justice Cocodia may jeopardize his cereer because as an interested party, he lacks the moral integrity to proceed with the trial, Osagie reiterated.

Barrister Osagie remarked that miscarriage of justice in most courts in Nigeria is due to pressure from the executive organ of government, and we of the Integrity Group are determined to pursue this matter because a politicized Judiciary is the midwife of tyranny.

It is also not in dispute that the Special Adviser to the incumbent Governor of Bayelsa State, High Chief Collins Cocodia, has close filial ties with the Honourable Justice T. Cocodia, aside bearing the same surname, thereby creating justifiable fears that the decision of his lordship will be influenced in favour of his close relative and the Government he is serving in as special adviser on Political matters.

ii. HANGING THREAT OF GIVING THE BAYELSA STATE CHAPTER OF THE ALL PROGRESSIVES CONGRESS (APC) THE “RIVERS STATE APC TREATMENT”.

“Members of the Peoples Democratic Party have been boasting that the Bayelsa State Chapter of the All Progressives Congress (APC) will be given the so called “Rivers State APC treatment” where it will not be allowed to produce a Governorship candidate for the forthcoming gubernatorial election, through a decision in suit YHC/16/2022 between Mr. Alex Izibenikibo Blankson Vs All Progressives Congress & 3 Ors. While we are not afraid of having the matter heard before an impartial judge without filial ties to any top-ranking officer of the incumbent PDP Government in Bayelsa State, we do not have confidence in Honourable Justice T. Cocodia being able to display impartiality in handling this matter, given the aforesaid filial ties and the judicial excesses displayed by him so far, as shall be narrated hereafter.”

“In the course of the hearing of suit No. YHC/16/2022 between Mr. Alex Izibenikibo Blankson Vs All Progressives Congress & 3 Ors, Honourable Justice T. Cocodia has displayed certain judicial excesses which are quite worrisome and which gives credence to our fears that he may be having an unholy and unjust agenda to purse against the All-Progressives Congress Bayelsa State Chapter. The judicial excesses complained of, are as follows:”

“a.REFUSAL TO HEAR OUR MOTION ON NOTICE FOR AMENDMENT OF ALREADY FILED PROCESSES. In the course of the pendency of suit YHC/16/2022 between Mr. Alex Izibenikibo Blankson Vs All Progressives Congress & 3 Ors, we briefed Mr. Tuduru Ede, SAN, to lead our counsel and upon a review of the pending court processes filed, a motion for amendment of same was sought to be moved on the 4th of January, 2023, when the matter came up but without hearing from any of the counsel in the matter, Honourable Justice T. Cocodia struck out the motion for amendment and proceeded with the hearing of other applications.

“Without prejudice to the fact that the foregoing could be the basis of an appeal, the brazen display of such judicial excessiveness is worrisome and given the effect a judgment could have before it is corrected on appeal, we urge that this be another reason for the Honourable Justice T. Cocodia to recuse himself from the continuous handling of the case.
“b. STRIKING OUT OF OUR NOTICE OF PRELIMINARY OBJETCION, SUO MOTU. In the course of the hearing of the matter on the 4th of January, 2023, Honourable Justice T. Cocodia, without an application from any of the counsel present, struck out our notice of preliminary objection even when same was not sought by any of the counsel present, simply because our lead counsel, Mr. Tuduru Ede SAN said he will not be adopting his processes in view of the refusal to hear his motion for amendment.

“c.SITTING UNTIL AFTER 5:00PM For a regular matter that is ordinarily not time bound and which was filed less than a year ago, Honourable Justice T. Cocodia displayed an uncommon and suspicious zeal to want to hear and conclude the matter as soon as possible and at the expense of fairness and impartiality. The court sat until after the close of work before complaints by some counsel of ill health necessitated an adjournment at about 5:13pm on the 4th of January, 2023. Again, this is worrisome.

“d.DISPLAY OF UNJUSTIFIABLE SENSE OF URGENCY TO HEAR AND DETERMINE THE SUIT BY FIXING SAME SOLELY FOR HEARING ON THE 4TH OF JANUARY, 2023. It is worthy to note that Honourable Justice T. Cocodia fixed suit No. YHC/16/2022 between Mr. Alex Izibenikibo Blankson Vs All Progressives Congress & 3 Ors which was instituted less than a year ago, fixed suo motu, specially and solely, the said suit for hearing on the 4th of January, 2023 being the first day of sitting after the High Court of Bayelsa State resumed from its vacation. Thereafter, His lordship adjourned the matter to a date lees than 48 hours from the time the court rose even in the face of complaints of ill health. The obvious impression being creation is that there is an agenda his lordship is pursuing and thus must be checked, my lord.

“e.CPNCEALMENT OF RECPRD OF PROCEEDING
It is regrettable that His Lordship, Hon. Justice I.T. Cocodia has held unto the records of proceedings and has refused to release same upon application by Counsel in the matter, thereby raising palpable and justifiable fears in the APC family, and frustrating interlocutory Appeals.