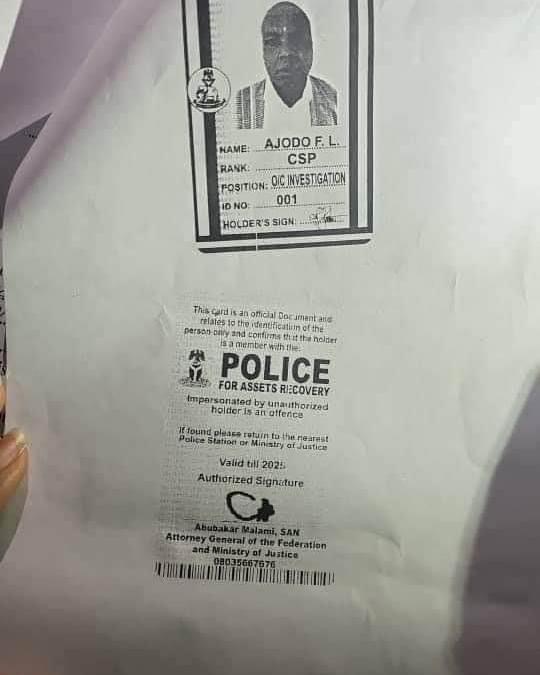 Fresh evidence has emerged that may have exposed the Attorney-General of the Federation and Minister of Justice, Abubakar Malami (SAN), who earlier denied his involvement in the invasion of the residence of a Justice of the Supreme Court, Mary Odili, by security operatives.

The security operatives were said to consist of soldiers and officers of the Nigeria Police Force (NPF) who identified themselves as members of a joint task force.

Even though he has denied involvement in the invasion of the house of the number two judge in the country, Malami still has to come clean with convincing explanations.

The Identity Card of the police officer who led the assault on the residence of Justice Odili was signed by the AGF.

It was learnt that the name on the ID Card is Ajodo F. L. of the Police And Assets Recovery unit.

His rank is CSP (Chief Superintendent of Police), while his position says OIC Investigation. Ajodo’s ID Card number is 001.

The ID Card was signed by Abubakar Malami (SAN), Attorney-General of the Federation.

NAIJA LIVE TV had earlier reported that the Chief Magistrate of Wuse Zone 6 Magisterial Division in Abuja, Emmanuel Iyanna, admitted that he was lied to, which made him sign the search warrant allowing the invasion of the residence of the Supreme Court judge, Mary Odili.

Iyanna had said he was misled by the Federal Ministry of Justice under Malami.

The Chief magistrate consequently revoked the search warrant due to misrepresentation in the first information application supplied by an ad hoc public asset recovery panel domiciled under the justice ministry and overseen by Malami.

“Upon misrepresentation to this honourable court that led to the issuance of a search warrant in favour of Joint Panel Recovery, Ministry of Justice, against House 9, Imo Street, Maitama, Abuja, dated October 29, 2021; in view of the above fact, the said search warrant is hereby revoked,” he had ruled.

Armed operatives had stormed Odili’s residence bearing a warrant that was issued based on information from a whistle-blower, Aliyu Umar, an Abuja-based resident.

Umar had deposed on October 13 that illegal activities were going on at 9, Imo Street, Maitama which should warrant immediate action from law enforcement agents.

Odili is next in line to Nigeria’s Chief Justice, Tanko Muhammad and stands to benefit from his removal should that happen before her retirement on May 12, 2022.

Sources said the raid, approved by the Attorney-General of the Federation and Minister of Justice, Abubakar Malami (SAN) was to let her know she would not be allowed to succeed Muhammad as the head of the nation’s judiciary.

Another source said, “Regarding the raid on Odili’s House, it was planned because they don’t want her to become the next CJN. Though she’s retiring in about six months, that is like six years to the cabal. They are planning to remove Tanko Muhammad before then and don’t want the woman to even act as CJN for one day.

“The most senior Justice after Odili is Olukayode Ariwoola but they claim he’s got a terminal illness. He is expected to retire soon on health grounds. The fourth most senior of the Justices who could take over as CJN is Musa Dattijo Muhammad, another Northerner from Niger State. He is also expected to retire in 2023.

“They accused Odili of being a PDP (opposition party – Peoples Democratic Party) judge and that her husband helps to fix lots of judgements at their home in Abuja. That was why the husband was also embarrassed recently.

“Forget also about Malami’s denials, he was directly in charge of the raid. He chose the day President Muhammadu Buhari arrived from Saudi Arabia to do it because he needed to impress Buhari that he is still loyal as efforts are being intensified to remove him as Minister.

“They want to force Tanko out soon and don’t want the woman to replace him. They considered her too close to the PDP, so they have to embarrass her to ensure she doesn’t get to replace him at all.”