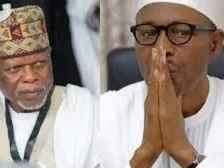 The Comptroller General of Customs, Hammed Ali has said at 70, President Buhari should not have contemplated seeking re-election in 2019.

He, however, said that it was President Buhari’s love for the country and his integrity as well as his monumental achievement that had spurred him to seek another four year mandate.

The Customs boss, who led the Buhari Support Organization in a courtesy visit to the President at the State House, told Buhari that his administration had saved the country.

“This is because you are a man of integrity, of honesty and above all Mr. President you love this great nation. I have said it and I will repeat it here Mr. President with all due respect, at 70 plus, with a good retirement benefits and with your house in Daura, if I were you I will see no reason to be in this arena.

“But why are you here? It is because you love this great country. You left your comfort to serve Nigeria and that is why for those of us who love you for who you are said we must follow you and ensure that your second term in this country becomes a reality.

“Today is 2018. Way back in 2014 for those who did not know when you talked about your integrity, your achievements as a governor, as a minister, those that have gone are the ones who will understand what we are talking. Those of us who have experienced those past years know exactly what it was. But today, 2018, those of us here know that your being president has changed this country.

“Three years into your tenure, the tremendous achievements that have been made, we have laid the foundation; we have started building roads but Mr. President we must complete the building.

“What do we need to do? We must as your loyalists and people who believe in this country tell you that we are with you shoulder to shoulder and ensure that you are elected. And then the building will be completed so that never again will there be cause to destroy Nigeria.

“For me, you have been my mentor in service and out of service and I have been fortunate enough to have worked very closely with you. And so when I say some of these things I am saying it for the bottom of my heart because I know you, I know your commitment and your respect to this great nation.

“And Mr. President, here in the city, the seat of government, there were booms going off every day. Today, we can sleep with eyes closed, today I drive at midnight, today we can breathe the air and most importantly, those of us who are Muslims can pray in the Mosque during Ramadan.

“That would never had happened. I remember as far as Kaduna is from north east, we could hardly sleep at night because of security, today we have that security. What else are we looking for?

“Mr. President, on the economy, today our economy has grown all because of the discipline you have instilled in the financial sector. All those non-challenges attitudes, all those days of siphoning money are no longer feasible.

“I tell you Mr. President and I use myself as an example, way back I used to get some funds and I used to use it and buy rice and give to some people. Mr. President today, I have to ration the rice that is fiscal discipline.

“Now, I know how to cut my coat according to my size and that is all because of you Mr. President. What else can we ask for?

“Mr. President, those of us that you gave trust and ask us to go out and work, today, we are working, we are deriving, not because of anything especially in areas like ours, where we step on big men’s toes, we do that because we know nobody will come and ask you to talk us and ask us to stop what we are doing.

“Mr. President, one area that I know touches your heart is that today we are about reaching our rice requirement in Nigeria, today we are seeing physically where people are rejecting foreign rice for local rice, today Mr. President if you go to some of our houses, what you will see is local rice and that is wealth for our people.

“Last year, during the Hajj period when I went home, many farmers came to me that they have never had it so good, so much so that the first 25 people that paid up their money when Hajj fares were announced, were rice farmers.

“What more can we say in terms of growth of wealth. People say we are hungry; of course the lazy must be hungry because if you do not work hard, manner doesn’t fall from heaven. So when people say we are hungry, there was never a times in Nigeria that food is dropped in the mouth of the people and they can never be.

“I can go on and on and enumerate what you have done in just three years of your administration but three is not enough to undo what was done in 16 years.

“The destruction, the monumental stealing that we have witnessed, the destruction of our structures and our system, it takes more than eight years to be able to address them and I believe in three years you have done wonderfully well.”