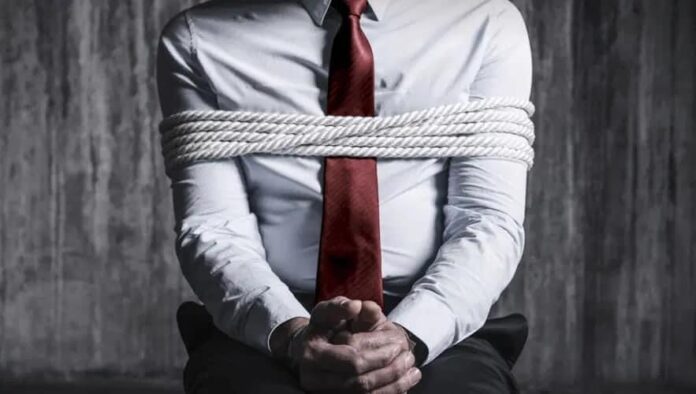 An information technology expert, Cyril Isong, has narrated how he allegedly connived with others at large to lure a House of Representative member to a short let apartment in Asokoro, Abuja, with a woman and held him hostage afterwards, dispossessing him of $2,000 and N65,000.

The 36-year-old suspect, who lived in Abuja, was said to have been tracked down and arrested in Akwa Ibom by operatives of Force Intelligence Response Team led by DCP Tunji Disu following a petition addressed to the Inspector-General of Police, Usman Baba, by the lawmaker.

The victim was said to have alleged in the petition that on August 4, 2020, he received a call from an unknown caller who introduced himself as Sani and claimed to be a former National Assembly member.

Sani reportedly claimed that he was having health challenges and was advised to contact the lawmaker who was in charge of the affairs of former members of the House.

According to sou, the rep alleged that he directed Sani to his house in Abuja but the caller gave an excuse he had been rendered immobile by the illness and appealed to the lawmaker to come to his apartment in Asokoro.

On getting to the short let facility, the victim reportedly met two men who introduced themselves as Sani’s brothers. He was said to have been attacked immediately he was ushered in, blindfolded and tied up.

“They collected $2,000 and N65,000 found on him. They searched his car and took all his valuables. They demanded a number to call for a ransom. He begged them and they freed him. He reported the incident at the Asokoro Police Station. Luckily on August 31, 2021 Isong was arrested in his state in Akwa Ibom.” a police source said.

Isong, claimed he read chats between his wife and the lawmaker on the former’s phone, adding that the wife broke up with him when he confronted her about her relationship with the rep.

He said, “I studied Information Technology and got married in 2017. The first two years of our marriage were beautiful and we travelled across the world for business and pleasure. I thought our marriage was made in heaven until the COVID-19 pandemic destroyed everything. We lost many goods and we were indebted.

“Suddenly I noticed that my wife started locking her phones and as a computer guru, I was able to tap into her line and started reading her discussion with various men. I was frustrated reading how she begged them for money. The honourable (lawmaker) was one of such persons. He even visited our house pretending to be a family friend. It was his visit that led to the final break-up of my marriage because I confronted my wife and she got angry and left.”

Isong said he organised the kidnapping to ‘deal with’ the lawmaker and involved some cult members he knew while in the university.

He explained that they lured the lawmaker into an apartment in Asokoro, held him hostage and dispossessed him of his cash and other valuables.

He stated, “They were the ones who arranged one beautiful lady who spoke to him through a video call. The apartment is a short let in an estate in Asokoro and it’s N80,000 per night. On the agreed date, the honourable came; we grabbed him and tied him up. I did not speak throughout because he might recognise my voice.

“We collected all the valuables and cash found on him and inside his car. He refused to call his family for more money, rather he asked for our account number. I knew that he wanted to set a trap for us so we decided to leave him and run. We didn’t beat him. I travelled back to Akwa Ibom since I could no longer afford to pay rent in Abuja. It was when I entered a bank to open an account that the police arrested me.”

Isong stated that he had also defrauded two other victims using tricks similar to the one deployed against the lawmaker.

He said, “One of the victims was Tania who ran a restaurant. We were friends but when my wife left, we started dating. She closed down her restaurant and I helped her to sell the valuables. I kept N300,000 and promised to give her but failed.

“She kept disturbing me and I knew that I would not pay because I was indebted. She is rich but refused to let go. I called her with an unknown number and introduced educational tourism to her in case she wanted her daughter to study abroad. We lured her into an apartment and collected N80,000 cash from her.’’

He stated that the third person was her sister-in-law who he invited to the Asokoro apartment under false pretences.

He added, “When she arrived, I tied her up. We saw a lot of money in her dollar account but to withdraw. It was hard. We just took the N500,000 cash found on her and disappeared.”