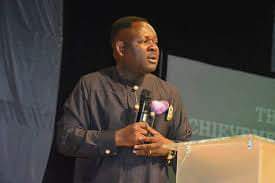 The Commissioner for Ijaw Cultural affairs in Bayelsa state , Hon Austine Dressman, has lost 7 million naira to his Personal Assistant who is currently at large

According to inside sources, on Friday 25th May Hon Dressman gave Mr Buddy P. Ezekiel, a 31 year old native of Khana LGA of Rivers state the sum of seven million naira at his Ijaw House office to deposit at his Edepie residence at Gamag street. But unfortunately for him the aide had other options in mind and so disappeared with the money

As of filling this report it is unclear if the commissioner had contacted the police, but scouts have been sent to Rivers state to help track Mr Buddy

Mr Austine Dressman was sworn into office on 15 December 2016 among four other commissioner nominees. He was contracted by the restoration government to build the Heroes Park, a strip of land just beside the Ijaw House designated as the burial site of ‘notable Ijaw icons’. Mr Dressman, a native of Brass LGA who is a strong disciple of senator Ben Murray-Bruce, has been on a spending spree of late, acquiring many choice properties including an estate opposite Tonimas filling station in Edepie town and a massive hotel at Igbogene, close to traffic junction