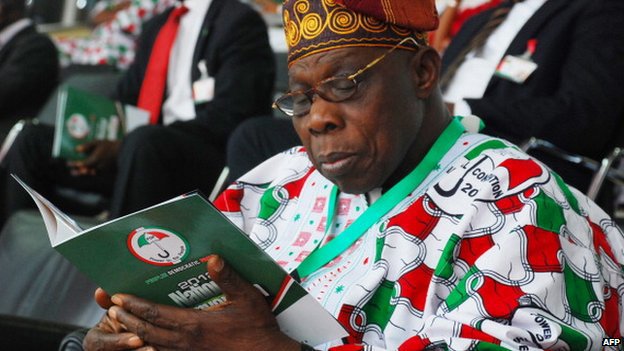 The Peoples Democratic Party (PDP) is alarmed by the revelation of former President Olusegun Obasanjo that the All Progressives Congress (APC)-led Federal Government is plotting to arrest him on trumped up charges and detain him indefinitely.

PDP says the revelation coming from a Nigerian of Chief Obasanjo status is terrifying as it has heightened the tension in the polity and confirmed our fears that our dear nation has descended into a police state where any Nigerian, who holds a divergent view to President Muhammodu Buhari 2019 re-election bid, becomes endangered.

The alarm by Chief Obasanjo has further shown that the PDP has not been crying wolf regarding the plots by the APC Federal Government to frame, arrest, detain and arraign political opponents of the APC, including regular Nigerians, for holding or canvasing opinions that are divergent to the interest of those in power.

We invite Nigerians to note the travails faced by perceived opponents of Buhari Presidency including Senate President Bukola Saraki, Deputy Senate President Ike Ekweremadu, Senators Shehu Sani and Dino Melaye, who had raised similar alarms in the past.

The PDP urges Nigerians to note how APC controlled security forces, on Wednesday, arrested and detained opposition members in Ogun state, including a member of the House of Assembly, Hon Adebiyi Adeleye, who were going about their legitimate activities, only to tag them as cultists.

The PDP condemns APC’s resort to persecution, intimidation, harassment and framing of our members, as well as dissenting voices, just to suppress the opposition ahead of the 2019 election.

PDP wants the APC and Buhari Presidency to note that no amount of coercion, intimidation and illegal arrests will alter the determination of Nigerians to vote out the dysfunctional APC and rescue our nation from the shackles of the Buhari Presidency and its misrule, come 2019.