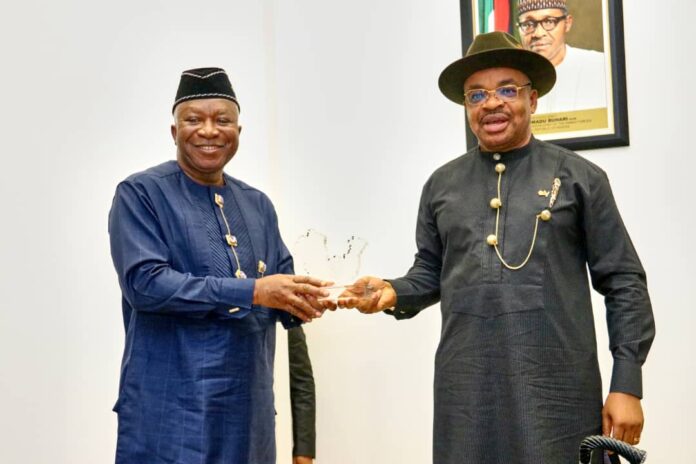 Emmanuel particularly appreciated an aspect of the plan designed to enable ex-agitators explore other economic potential of the region instead of depending mainly on the N65,000 monthly stipend.

Emmanuel, who spoke in Government House, Uyo, when Dikio paid him a courtesy visit, described the new model of Train, Employ and Mentor contained in Tb e plan as a step in the right direction saying the strategy would turn ex-agitators into successful entrepreneurs.

He called on ex-agitators and beneficiaries of the programme to grab the opportunity offered them by Dikio and develop other economic potential in the region.

Insisting that stipends would not solve their economic problems, the governor urged them to embrace the opportunities in the maritime sector, which he observed was a major focus of PAP’s recovery plan.

He said: “Maritime resource is key to the development of any economy and it is a sector where people of the Niger-Delta region need to be trained. The fishery industry will be of great benefit to the region as it is surrounded by water.

“There are endless opportunities beyond payment of stipends. As a people, we can launch into these different industries that will benefit the region”.

Emmanuel thanked Dikio for acknowledging his work in the state and commended him for adding value to the region since he assumed office as the Interim Administrator.

Earlier in his speech,  Dikio applauded the governor’s strides especially in floating the Ibom Air, which he described as a trailblazer.

He futher congratulated the governor for the crowning of Akwa Ibom United as the Nigeria’s Premier league champion.

Dikio said he planned to key into the human capital development of Akwa Ibom by seeking opportunities in the state to train ex-agitators.

“Akwa Ibom is known for its human capital development. Others are agriculture and financing, particularly microfinance banks. The industrial strenght of Akwa Ibom is well known so we have come to key into all these for the ex-agitators”, he said.

The amnesty boss insisted that his major vision was to turn ex-agitators into successful entrepreneurs and job creators, who would look beyond N65,000 montly stipends.

He said: “Over the years, many of our people have been trained and they have all been added to the pool of the unemployed. We are looking out for big business concerns where our people can be trained.

“PAP will pay for the training but with the understanding that our people will employ and mentor afterwards. We are adopting the Igbo apprentiship system so that at the end of the day it’s a win-win for everybody”.