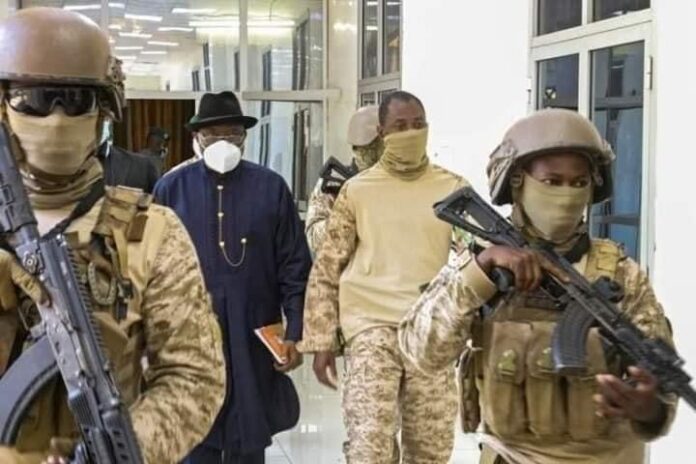 Nigeria’ former President Goodluck Jonathan who campaigned for a second term under the platform of the People’s Democratic Party (PDP) was conspicuously absent at its national convention on Saturday.

The event which took place at the Eagles square in Abuja had powerful PDP bigwigs in attendance. The likes of governors Seyi Makinde of Oyo, Douye Diri of Bayelsa, and Senate Minority Leader Enyinnaya Abaribe, among other top party officials and members.

NAIJA LIVE TV gathered that, at the eve of the Convention (Friday Evening) The Governor of Bayelsa State, Sen. Douye Diri and governor Seyi Makinde of Oyo led a powerful delegation to beg the Former President to attend the 2021 PDP National Covention but sources said the former President ignored their plea.

Prior to the convention, the former President’s media aide, Ikechukwu Eze, released his itinerary, disclosing that Mr Jonathan would be in Nairobi, Kenya, for a three-day peace and security event organised by the African Union.

“Former President Goodluck Ebele Jonathan will depart Abuja, on Saturday, for Nairobi, the Kenyan capital, to attend the 12th African Union (AU) High-Level Retreat on the promotion of peace, security and stability in Africa,” the statement said.

However, Mr Jonathan’s noticeable absence has heightened speculation of talks that he was planning to defect to the ruling All Progressives Congress (APC) where he may get a ticket to contest the 2023 presidential poll.

Although the former president’s supporters are goading him to join the ruling party, Mr Jonathan’ deafening silence has continued to fuel rumours that he may be considering the option provided he is guaranteed the candidacy of the presidential ticket in 2023.

In September, Yemi Akinwonmi, the acting national chairman of the Peoples Democratic Party (PDP) and other party officials went to Mr Jonathan’s residence to talk him out of defecting to the APC.

In October, NAIJA LIVE TV reported how Rivers state governor Nyesom Wike insisted that Mr Jonathan remain with the PDP as his interest would best be served with the party if he intended to run for president in the next political cycle.

Efforts to extract a statement from the former president’s spokesperson failed as Mr Eze’s phone remained unreachable as at the time of publishing this report.

Gov. Yahaya Bello felicitates with Jonathan on his 64th birthday