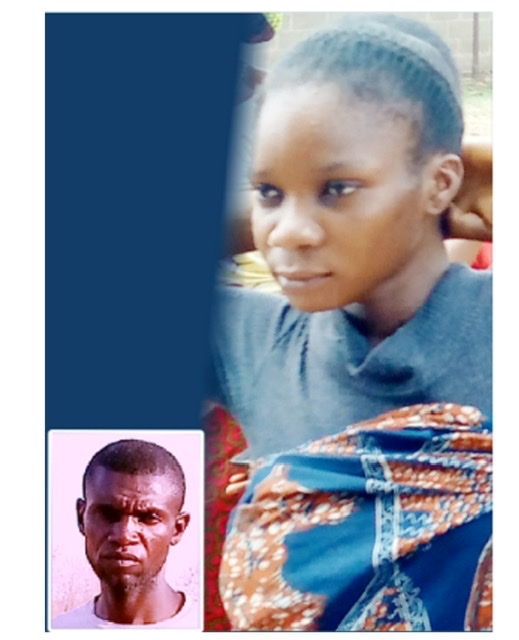 Residents of Rukubi, a sleepy community in Doma Local Governmnet Area, Nasarawa State, are still in shock and disbelief after discovering that their daughter was impregnated by a man who had died by hanging in Gbuko village, Awe Local Government Area of the state.

The body of Thomas Abakwa, a hunter, was said to have been found on a tree with a rope around his neck in a forest in Gbuko village about five years after he got married to his wife, Esther, in 2014.

With Esther and her only son finding it difficult to cope with life after the demise of their breadwin ner, she decided to relocate from Gbuko to Rukubi as a widow in search of greener pastures, particularly because her late husband was the only son of his parents.

At Rukubi, she came in contact with an alluring young man, Audu Genger, with whom she later fell in love. The news of a new husband after the mysterious death of the first one naturally gladdened the hearts of Esther’s relatives at their Tombu village in Keana Local Government Area when she went home with Genger to commence their marriage rites.

Although her bride price was rejected because she was pregnant for Mr Genger before introduction as was forbidden by her people’s tradition, the two lovebirds nonetheless returned to Rukubi where they settled down as husband and wife.

Events, however, took a new turn when Genger’s niece (daughter of his elder brother) named Pati came home from her school in Doma LGA and was found to be pregnant. Pati’s parents and other members of Genger’s family insisted that she must come home with the man responsible for her pregnancy.

After much pressure, Pati’s impregnator agreed on November 6 as the date to meet with her family members for a formal introduction. To the shock of Esther, who was seated with her husband at the venue of the reception, Pati’s would be husband turned out to be Abakwa, her former husband who died by hanging about two years ago.

The scene was said to have provoked a pandemonium as Esther, who was said to be shocked to the marrow at the sight of her ex-husband, marched towards him and asked: “Why are you here? You were my husband. You died some years ago and we buried you in Awe…”

But while she was yet speaking, Abakwa vanished into thin air, causing her to collapse and go blank.

Speaking in an exclusive interview with our correspondent, Esther narrated how Abakwa had died mysteriously and was buried before she relocated to the community where she met her new husband.

She said: “My name is Esther, a native of Keana. I met the late Thomas (Abakwa) in Awe Market in 2013 when I went there to trade with my mother who is now late. He saw me and picked interest in me, and we finally got married in 2014.

“We spent five years together as husband and wife while the marriage was blessed with a son.

“The late Thomas was the only son of his parents, although he had a sister who also got married but was killed during the herdsmen crisis.

“Thomas was a farmer and a hunter. We lived a happy village life. He was lovely and caring.

“In December 2014, he left for the bush to hunt and did not return. After three days of intense searching, he was found dead and hanging on a tree with his lifeless body decaying. We hurriedly buried him.

“I left the house because there was nobody to assist me and I relocated to Dinka part of Rukubi to join a friend and probably start a new life here.

“There I met Mr Genger, my second husband, and we got married.” she explained

‘How I fell in love with ghost’

But the fate that befell Pati was no less cruel than Esther’s as members of her family are now said to be busy seeking spiritual help to repel any evil spell her romance with a dead man might breed.

At the time of filing this report, she was said to have been taken into the sanctuary of a church led by a prayer warrior in Lafia, Nasrawa State capital, as was suggested by one of her friends.

After denying our correspondent access to Pati at Rukubi, his efforts paid off while Pati was being transferred from Rukubi to Lafia on Wednesday.

It was an intriguing encounter as the SS3 pupil narrated how she fell in love with the ghost that impregnated her and the cloud of uncertainty that now envelopes her life.

She said: “In 2020, precisely in October, I had closed from school at about 6pm and went to the roadside to buy a bag of pure water. There I met Thomas on a bike. He had come to the same shop to get some provision.

“He saw me and picked interest in me. He asked me to get anything of my choice in the shop. He indeed paid for all the things I picked in the shop and got my contact.

“He told me he was a businessman from Abuja but was based in Lafia. Within two weeks, we bonded together and spent nights together from one hotel to another in Lafia. But almost all our operations were in the night.

“He had a small car he was using. He bought everything I needed and that got me more attracted to him. He convinced me beyond reasonable doubts, so I didn’t care to know much about his origin.

“Four months after, we started having unprotected sex and he got me pregnant

“When I told him about the pregnancy, he didn’t hesitate. He promised to take full responsibility.

“He agreed to meet my parents and commence the traditional way of getting married to someone who is already pregnant.

“He actually made it to Rukubi where he met his first wife (Esther) who got married to my daddy’s younger brother after Thomas Abakwa was said to have died. Then he disappeared upon seeing his wife among the mother-in-laws he was to talk to.

“When Esther saw him arrive, she shouted and raised the alarm. That was when my world crashed like a pack of cards.

“I had no inkling my man, father of my unborn child had died before. But I later believed because if it wasn’t true, he wouldn’t have vanished. I’m short of words to express how I feel, but I have to accept my fate as an act of God.

“It is shocking because we had come a long way, and now the man has gone, leaving me with his unborn baby.”

Pati’s mother, Monica, told our correspondent that the family was concerned about how to manage the stigmatization from the incident.

She said: “A lot of people in Rukubi are not aware except in the Dinka village compound. We want to manage the issue carefully so that her future will not be ruined and she can live her life.

“We have approached a pastor and a reverend father in Lafia who confirmed that Thomas Abakwa was a ghost. He wasn’t a human being, so Pati needs to undergo some traditional rites for living with a ghost for years.

“But we shall do our best for her to return to her normal life. That is why we are going to see a pastor.”

On the pregnancy, the mother said she would consult the pastor and other family members to know what to do with it, saying it was already about four months old.

He confirmed that Thomas Abakwa actually died some years ago, adding that he personally attended his funeral when he died mysteriously in the bush by hanging.

He said: “If anybody claims he sees Thomas, then it must be his ghost. I can’t doubt what his wife is saying because she spent many years with him.

“But Thomas had died. I know him very well. He was my in-law and a man of few words.

“He was a hunter, and when he died, I attended his funeral. So it might be his ghost and not the real Thomas.”