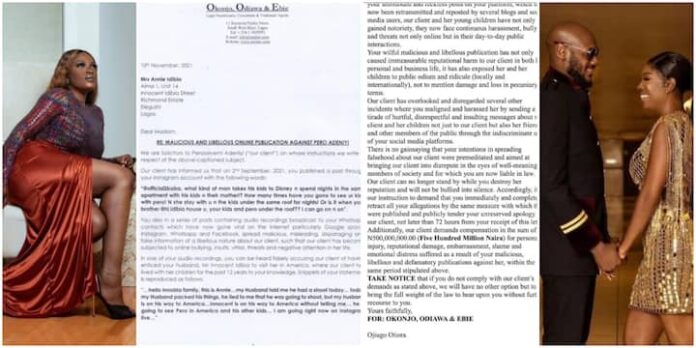 The pre-action papers dated November 10, 2021 also directed Annie to tender an unreserved apology to Pero within 72 hours of receipt of the letter or face court action

There is a new twist to the Idibia family fracas as 2Baba’s baby mama Pero Adeniyi has served birthday celebrant Annie Idibia with pre-action papers.

The pre-action Documents obtained by NAIJA LIVE TV stated that the law firm was informed by their client (Pero) about an Instagram post that read:

“@official2baba, what kind of a man takes his kids to Disney n spend nights in the same apartment with his kids and their mother!? How many times have you gone to see your kids with Pero” N she stay with you n the kids under the same roof for nights! Or is it when your brother @hi.idibia house u, your kids and Pero under the roof?? I can go on n on.”

They are demanding N500 million for damages

In the pre-action papers dated November 10, 2021, the law firm demanded N500 million for their client (Pero) for damages and directed Annie to tender an unreserved apology within 72 hours of receiving the document.

The law firm described Annie’s action as premeditated aimed at bringing Pero into disrepute in the eyes of well-meaning individuals.

NAIJA LIVE TV couldn’t confirm if Annie is in receipt of the document and thus informing her general public apology write up earlier today on the occasion of her 37th birthday.

LawObi Favour Chinecherem said:
“Why is everyone attacking Pero.
“Annie mentioned Pero in her post by the way..
“Annie needs to sit, and get a hold of her emotions. You cannot just wake up and start accusing people up and down.”

Ma Ry wrote:
“Ndi she’s married to Innocent Idibia and she’s not bothered coman see na “I think this is a sort of face saving”

Dinma Modella Isaac stated:
“The people saying she’s shameless , dash her some of your shame .. if you were in her shoes , you’d do worse !!! … Nigerians and their social media hypocrisy..”

Nwafor Kingsley Obinna opined:
“Why is Tubaba allowing all these? I’m not a fan of Annie but Tubaba should be a man and take charge on his home and it’s corridors. What’s all these nonsense?
“The only reason I will allow my wife go through these is if I have evidence of her Cheating but didn’t throw her out just for the only reason to torment and taunt her in my house. Please Tubaba did you catch Annie with another man?”
2Baba’s baby mama dares Annie to bring up evidence of her and the singer together as a couple

Meanwhile, NAIJA LIVE TV previously reported that 2Baba’s baby mama Pero had dared Annie to bring up evidence of the singer and her as a couple.

Pero stated that Annie knows she is not in contact with the singer because the actress keeps a tab on her activities with 2baba.

Speaking on the viral video with 2baba’s cousin and her friends, Pero said they know the truth about the situation of things. According to her, they are the ones who can explain the reason they called her the unshakable first lady.

#EndSARS: Tuface reacts after being dragged to court over protests