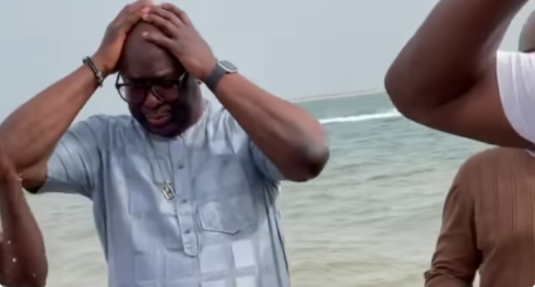 In a video shared by a Facebook user, the former governor was seen alongside four others praying inside the water.

They were being led in prayers by a woman who was seated in the water.

At some point, they were asked to sprinkle some of the seawater on their heads while praying.

“Fayose, you will see your glory,” one of them said praying aloud in Yoruba language.

In February, the former Ekiti governor said he was optimistic that the People’s Democratic Party (PDP) would produce the next president come 2023.

He also said would love to become Nigeria’s president if he gets the opportunity.

Fayose is being prosecuted by the Economic and Financial Crimes Commission (EFCC) for allegedly taking N2.2bn from the office of Sambo Dasuki, ex-national security adviser (NSA), for his governorship election in 2014.

‘If I Become President Of Nigeria, I Will Send Obasanjo Back To Prison’ – Fayose Vows

”I Will Remain Headache To My Haters In 2020″ – Ex Ekiti Gov. Fayose Blows Hot