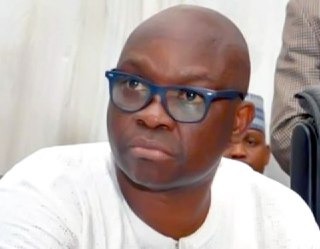 Former Ekiti Governor Ayodele Fayose has declared interest in succeeding President Muhammadu Buhari in 2023.
In a statement released on Thursday, the former governor stated that he would be contesting to be the Peoples Democratic Party (PDP) flagbearer in next year’s election.

“May I also state clearly that I will be seeking the ticket of the PDP to contest the next presidential election,” he said.

According to him, reports claiming he endorsed Obi and the zoning of the Presidency to the Southeast is false.

Fayose added: “No doubt, I have great respect for Peter Obi as a leader and I respect his aspiration, but at no point did I endorse his presidential ambition or that the presidency be zoned to Southeast.

“Rather, my take is that the presidency be zoned to the Southern part of Nigeria.”

Recall that Funso Fayose, former Governor of Ekiti State Governor’s son had advised his father against running for the presidency without plans for Nigerians in 2023

Funso in a post on social media condemned the government for its failure to tackle insecurity which recently saw terrorists attack an Abuja-Kaduna railway.

According to Funso, the damage President Muhammadu Buhari has caused in the country is beyond words and generations to come will bear the brunt.

He questioned the likes of Bola Tinubu, Nyesom Wike, Aminu Tambuwal on what they have to offer Nigerians following the declaration of their ambition.

Funso wrote, “It’s a very important question what does Tinubu, Saraki, Wike and Tambuwal have to offer this country? The nation is almost, if not a failed state. Yet the political desperation is more than the need to fix the nation. You guys have been in power for as long as I can remember, so what’s new?”

The former Governor’s son in a message to his father wrote, “Dear dad if you have intentions of running for President without a road map to get us out of this mess, please don’t sir.”