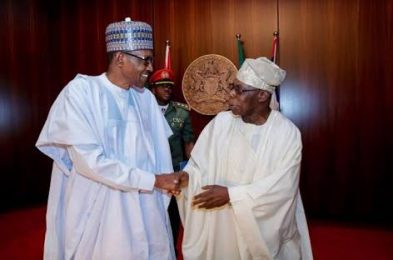 President Muhammadu Buhari may have resolved to probe all major projects awarded when former President Olusegun Obasanjo was at the helm of affairs of the country between 1999 and 2007.

However, the probe, it was gathered will be in phases.

The Economic and Financial Crimes Commission, EFCC, has therefore, been directed to commence investigation into contracts awarded during that period.

Consequent upon the directive, the EFCC has commenced investigation into all road projects awarded across the federation as part of the assignment.

#NaijaLiveTv gathered from sources in the Presidency and the Anti-Graft Agency that a letter has been dispatched to the Office of the Head of the Government of the Federation, (SGF) to furnish the Agency with details (costs, year of award, locations, contractors) of road contracts awarded by the Federal Government from 1999 to 2007.

The Cabinet Office, which coordinates the activities of the Federal Executive Council (FEC) is domiciled in the Office of the SGF.

#NaijaLiveTv Exclusively reports that there has been altercation between former President Obasanjo and President Buhari of late on issues bothering on 2019 general elections.

Recall that Obasanjo had in a famous lengthy letter to Mr Buhari in January, 2018, heavily criticised the government and advised the President not to seek re-election in 2019.
In the letter, Mr Obasanjo canvassed for a coalition that will kick the incumbent President out of office and has also gone a step further by mobilising his allies across the country to join his Coalition for Nigeria Movement.

On his part, Mr Buhari has equally fired back at Mr Obasanjo, saying he spent over $16billion on the power sector during his regime only to give Nigerians darkness.
Recently, Mr Obasanjo raised an alarm alleging plot by the government of the day to frame him up, saying his life was under threat.

Media Aide to the former President, Kehinde Akinyemi, had said in a statement last week that, “Impeccable security sources have alleged Chief Obasanjo’s name is on their Watch List and that the security of his life cannot be guaranteed.

“According to these informants, many of who are in the top echelon of the Nation’s security management and close to the corridors of power, the operatives are daily perfecting how to curtail the personal liberties of the former President and hang a crime on him.

But, the Minister of Information and Culture, Lai Mohammed would not allow such a weighty allegation go without a measured response.

He told the former President that only the guilty should be worried as Buhari government would not frame up innocent Nigerians.

According to Mr Mohammed, “This administration will never engage in a frame-up of innocent citizens. That is neither in the character of President Muhammadu Buhari nor in that of his administration.

“Only the guilty should be worried. To paraphrase an African proverb, a man who has no wife cannot lose an in-law to the cold hands of death.

”The administration is also strongly committed to the tenets of democracy, including freedom of speech and the right to dissent.”