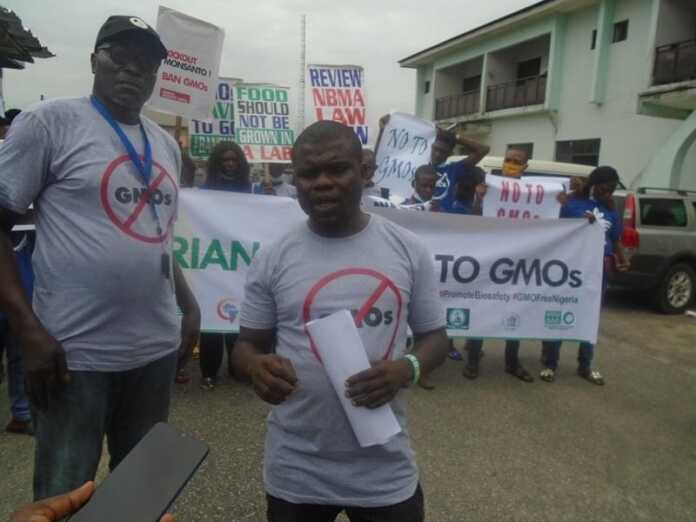 Concerned Environmentalists based in Bayelsa State yesterday staged protest march against genetically modified food displayed on supermarket shelves in the state, asking the Federal Government to ban the consumption of GMO products due to its cancerous tendencies.

The coalition Environmentalists and Civil Society groups led by the Genetically Modified Organisms Free Nigeria Alliance, the Environmental Rights Action and the Health of Mother Earth Foundation, HOMEF, the GMO Free Nigeria Alliance, also called on the members of the State Assemblies and the National Assembly to initiate amendments to laws controlling the display and sales of GMO products on the supermarkets.

The protesters, who were armed with placards with inscriptions “Food should not be grown in labs”, ‘We want a GMO Free Nigeria’, ’Kick out MONSANO, Ban GMOs” and “Review MBMA laws, Now!” ,supermarkets in Bayelsa state are filled with genetically generated foods without label indicating their harmful effects and offering the people the choice to choose.

The protesters also demanded the repeal of the National Biosafety Management Agency Act which came into force in 2015 and reviewed in 2019 to address some contentious aspects of risky modern biotechnology and make the law more effective.

The Activists from the Coalition of Civil Society Organizations marched through the Opolo axis of the Melford Okilo Road to Ekeki Park and the Secretariat of the Bayelsa State Council of the Nigeria Union of Journalists in Yenagoa to draw attention to the dangers of Genetically Modified Foods and Organisms to humans and the environment.

They argued that Nigerians are consuming foods from market shelves as well as using pesticides and toxic chemicals without realizing that they are made from genetically modified organisms with adverse effects on human health, the ecosystem and source of livelihood of local farmers.

Coordinator of the GMO-Free Nigeria Alliance in Bayelsa State, Mr. Akpotu Ziworitin asserts that GMOs which could be found in food such as Noodles, Pizzas, Mayonnaise and other crops and seedlings are promoted on false premises of having more nutrition and higher yields.

The Chairman of the Nigeria Union of Journalists, Comrade Samuel Numunengi assured the protesters of the media practitioners support towards the campaign against products that may be harmful to the people, “there is the need for the nation to take another critical look at the importation of Genetically modified foods and chemicals into the country”.