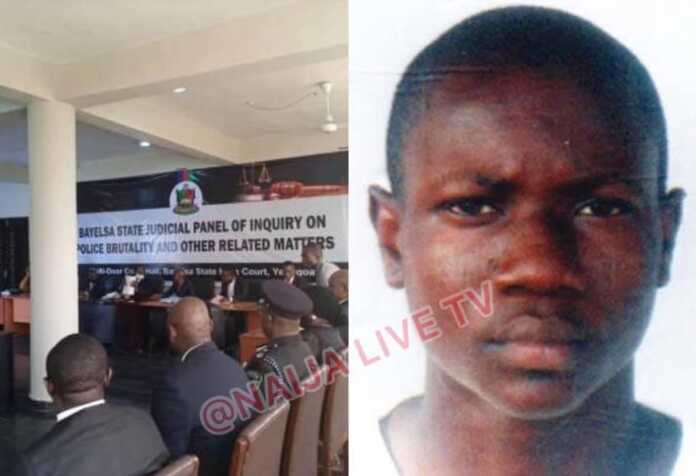 The Bayelsa State Judicial Panel of Inquiry on Police Brutality and Other Related Matters sitting in Yenagoa has ordered the release of the corpse of a 17 years old boy, Emmanuel Victor, shot dead by a trigger happy policeman along Gen Sani Abacha road, in 2011.

The Judicial Panel of Inquiry headed by Justice Emmanuel Ogola (rtd) despite prosecution and sentencing to death by hanging of the trigger happy policemen involved in the killing of Emmanuel Victor four years ago, also awarded the sum of N5million to the bereaved mother for proper and decent burial.

The Chairman of the Bayelsa Judicial Panel, Justice Emmanuel Ogola while delivering the judgment in a petition filed by the deceased mother, Grace Victor in the suit numbered BYS/JPI/011/2020, ordered the State Police Command to produce the corpse for burial by family and a sum of N5million paid for burial of the deceased.

According to the Panel Chairman,” there is no compensation for what was pronounced as vicarious liability or so; nothing that the police man who committed the crime has already been sentenced to death.”

Also, the Judicial Panel awarded the sum of N16million to Daniel Kokorifa, a Federal Road Safety Corps (FRSC) official attached to the Rivers State Command and father of a 17-year-old boy, Innocent Kokorifa, shot dead by men of the Anti-Vice Unit of the Bayelsa Police Command in August 2016.

Daniel Kokorifa, who is from Okpotowarie community in the Southern Ijaw Local Government Area of the state, in his petition numbered BYS/JPI/012/2020 had asked the panel to look into the sum of N6million incurred during the murder of his boy, legal struggle to get justice and the burial of the deceased. Justice Young Emmanuel Ogola however awarded the sum of N16million in temporary compensation.

Meanwhile, the Bayelsa State Judicial Panel of Inquiry on Police Brutality and Other Related Matters headed by Justice Emmanuel Ogola (rtd) has delivered judgement on over thirteen petitions received with over N40million ordered to be paid to various petitioners.

In a statement released by the member of the Panel and Chairman of the Nigerian Union of Journalists (NUJ),Bayelsa State Chapter, Comrade Samuel Numunengi,”So far, 13 judgement have been delivered by the panel. Out of which two have been adjourned sine die and 10 in favour of the petitioners. Over N40million awarded by the panel in damages.”