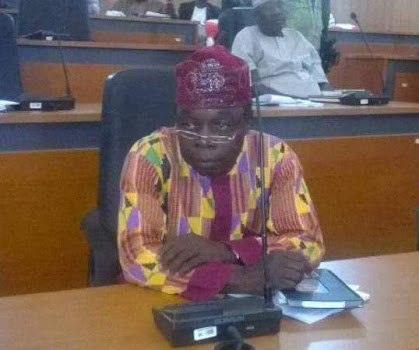 The Ekiti State House of Assembly has suspended the member representing the Ikere Constituency 2, Mr Sunday Akinniyi, for alleged terrorism and sleeping in the last three years.

The lawmakers also barred Akinniyi from the vicinity of the Assembly complex and mandated the clerk to lodge a formal complaint of threat to lives of members against him to security agencies.

The Chairman, House Committee on Information, Dr Samuel Omotoso, said the suspension followed series of allegations levelled against him by the Leader of Business, Tunji Akinleye.

He said the decision was reached based on a report submitted after investigation carried out by the Ayodele Fajemilehin-led committee of the assembly.

“Hon Akinniyi Sunday was alleged few weeks ago of breeding terrorism within the institution of the House, violence towards the mace in a properly constituted plenary session, belligerent attitude and acts of bellicosity against his colleagues and pugnacious behaviour in his constituency against his own people, all amounting to gross misconduct unbecoming of any honourable member of this House.

“The suspended member was also regularly absenting himself, especially when issues relating to his constituency are slated for discussion.

“Despite complaints of negligence from his people, he remained adamant.”

Omotoso recalled that Akinniyi was initially removed as the Chief Whip of the House on May 24, 2018 when his alleged misconduct became unbearable, towards making him more responsible.

“Rather than achieve this, the few occasions he presented himself for official duties in the House, Hon Akinniyi was in the habit of sleeping from the beginning of any programme to the end to the extent that he was nicknamed ‘the sleeping honourable’.

“Several attempts by the Speaker (Kola Oluwawole) advising him to pay attention to his people and his health has been rebuffed with insults.

“It is in reference to all these that this House viewed the failure of Akinniyi as incompatible with the spirit of good governance and quality representation of the present House of Assembly and he is hereby suspended indefinitely.”