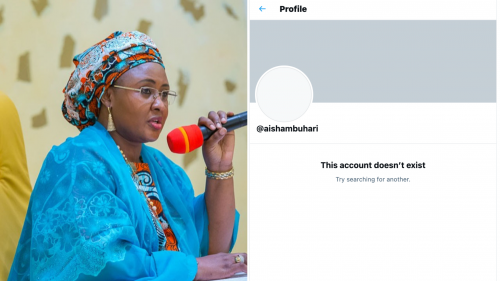 Aisha Buhari, Wife of President Muhammadu Buhari, has announced the deactivation of her Twitter account following the ban on the microblogging site by the Nigerian government.

Nigeria’s information and culture minister, Lai Mohammed, had announced Twitter’s suspension in a statement by his media aide, Segun Adeyemi, on Friday.

The suspension by the Nigerian government comes days after a post by President Buhari on the 1967 civil war was deleted by the microblogging platform.

The suspension of the social networking service was also shared on the Twitter handle of the Federal Ministry of Information, which has since generated reactions from some Nigerians on Twitter.

The Nigerian government’s spokesman cited “the persistent use of the platform for activities capable of undermining Nigeria’s corporate existence” as the reason for the suspension.

In what appeared as solidarity with her husband’s administration, Aisha, who joined Twitter in February 2016, and has over one million followers on Friday, said she was deleting her account.

“I will be deactivating my Twitter account for now. Long live the Federal Republic of Nigeria,” she tweeted.

The Nigerian First Lady had gone off the radar around September 2020, shortly after the flamboyant wedding of her daughter, Hanan and her groom, Mohammed Turad.

Apart from the luxury on display, event planners for the wedding were flown in from the United Arab Emirates to add colour and spice to the ceremony.

Earlier in August 2020, the First Lady was also reported to have flown to Dubai in a private jet owned by billionaire Mohammed Indimi under the guise of going for a medical emergency but to shop for luxury items ahead of the wedding.

Most of the items, including souvenirs used for the wedding, were brought in from the foreign country.

A top source had told SaharaReporters in December 2020 that the First Lady had now relocated quietly to the UAE and that she would not be returning anytime soon.

“Aisha Buhari has relocated quietly to Dubai. She had been going even before the daughter’s wedding. For three months now, she had been there.

“And then, Zahra had a baby. Aisha has been away since. Occasionally, she issues statements announcing the distribution of palliatives. She cited insecurity in the Villa after that shooting incident,” a presidency source had stated.

Efiong Akwa: An Administrator with a Midas touch in...