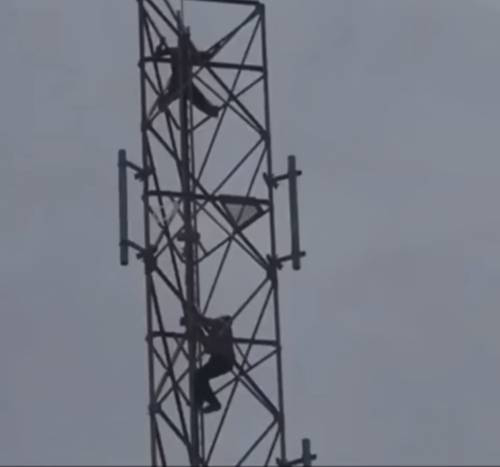 A man in Gombe state has threatened to commit suicide by falling from a telecommunications mast if a woman is not married to him by his parent.

The man was said to have climbed the telecommunications mast in the central area of Gombe city in the early hours of Sunday, in protest at living as a bachelor despite being an adult.

An eyewitness said the young man may have been suffering from depression.

He said in Hausa, “For over three hours now, the young man has been up there insisting that he would commit suicide except his father takes a bride for him.

“Right now I can confirm that operatives from the Fire Service, the police, and Civil Defence Corps have been appealing to him to come down.

“As you may see from the video clip, a man has climbed up to plead with him and from all indications, there’s hope that he is likely to comply.

“We’re told by someone who claims to be from the same neighborhood with him that he’s suffering from depression.

“He said the young man got digressed when his father died a few years ago.”

Asked whether operatives provided cushioning materials for the young man to land safely in case he falls, the narrator said there was nothing to suggest such was provided.

NAIJA LIVE TV can, however, confirm that at the time of filing this report, the young man had yet to abandon his attempt to commit suicide.

Why I dumped APC for PDP – Gombe Minority Leader

How restructuring will help Nigeria — Dankwambo