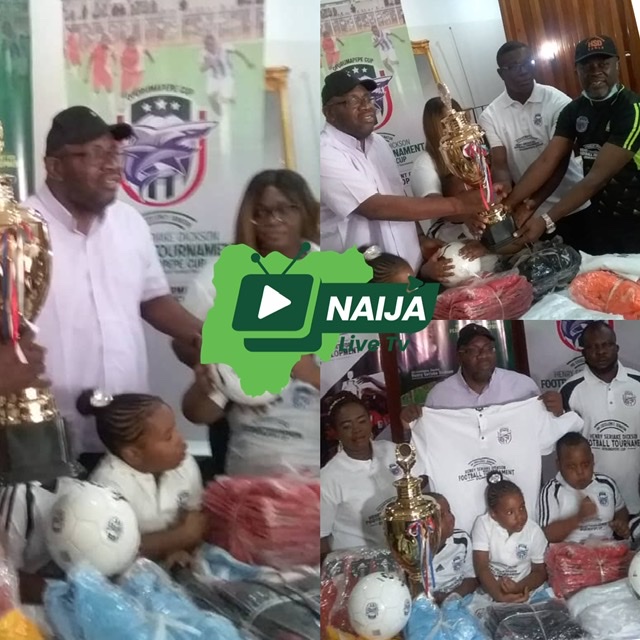 The immediate past Governor of Bayelsa State and current Senator representing Bayelsa West
Senatorial District in the 9th Senate of the Ferderal Republic of Nigeria, Senator Henry Seriake Dickson has officially unveiled the Henry Seriake Dickson Football Tournament, tagged “Ofurumapepe Cup” at his Abuja residence, in the Maitama District of the FCT Abuja on Friday 12th of November 2021.

Senator Dickson revealed that the tournament is aimed at youth empowerment and grassroot development.

Addressing Journalist in Abuja at the unveiling , Sen. Dickson insisted that this was a fulfilment of the promises he made to the people as the governor of Bayelsa state to prioritise sports development in the state even when he was out of office.

According to Senator Dickson, through the Henry Seriake Dickson (HSD) Foundation, the lives of youths in the state will be transformed through Sports which he believed will bring youth restiveness, cult activities and other vices to it’s barest minimum.

He explained that the records will show that sports was one of the projects he took seriously as the governor of Bayelsa State, adding that the tournament will amongst others, encourage the development of grassroot sports and that apart from football, traditional wrestling and swimming will also be introduced considering the terrain of the state.

‘In his words, ‘as a governor we promoted sports development, we took wrestling to the national stage and I am happy to mention that most of our athletes are doing well and they benefited from that program.

Subsequently,  he unveiled the Ofurumapepe Football Competition and called on the Youths of Bayelsa State and the Corporate world to fully participate.

‘‘With the ofurumapepe cup, our dream of promoting grassroot sports development did not end with my tenure as a governor, as I promised through the Henry Seriake Dickson foundation we will continue with this laudable objective, said Senator Dickson.

“By next week, our local organising committee will be meeting with all the community youths in the Bayelsa west senatorial district and all necessary arrangements have been put in place to ensure that the best results are achieved as expected’’, he stated.

With the theme, ‘‘Youth Empowerment For Peace and Development’’, the sports loving senator explained that football and traditional wrestling has been expressively harnessed by his administration, he added that the cup instituted was in honour of his late father, who was a maiden wrestling champion.

Senator Dickson however called on youths in the region to actively identify with the Ofurumapepe Football Tournament and channel their very productive energies towards initiatives that will develop their minds and body.

“I also want to use this opportunity to call for peace in all our communities as the youths come out en mass  to participate. I call for the spirit of good sportsmanship, there will be no losers at the end of the events. I also want to call on all our security agencies to support this initiative’’ he said.

Speaking earlier, Technical Consultant of the Henry Seriake Dickson Football Tournament and Ofurumapepe Cup , Mr Ono Akpe, while enumerating the various prizes that are up for grabs stated that all is set for the kick off as Senator Henry Dickson has provided all the jerseys, sports kits, football, trophies amongst others for the 76 participating communities.

Mr. Akpe said on Thursday 18th November, Jerseys and sports kits will be presented to the 76 communities in Sagbama and Ekeremor local government areas which make up the Bayelsa West Constituency, the official kick off will be on Sunday 21st November while the finals will be held on Wednesday, 22nd December at Toro-Orua in Sagbama LGA.

‘‘There are going to be 6 constituency champions from the 2 constituencies, 3 from Sagbama and 3 from Ekeremor each will get N250,000 and the runners up at the constituency level will get N100,000 each, thus buttressing the remark by Senator Dickson that there will be no losers.

“For the next two months from November to December, youths of Bayelsa West Senatorial district will be actively engaged” he added.

Mr. Ono Akpe, the technical consultant of the Henry Seriake Dickson Football Tournament and Ofurumapepe Cup while enumerating the various prizes that are up for grabs said
Communities are expected to get forms for their teams from the Constituency office of Senator Dickson through the Chairman of the Local Organising Committtee, Mr. Tony Ogola or the Secretary, Mr. Job Makka. Forms would be sold for N2000 only.

The Henry Seriake Dickson Football Tournament shall be an annual tournament for youths in Bayelsa West Senatorial District.

Ofurumapepe Cup will Light up Bayelsa West as Draws, Presentation of Sports kits set for Friday