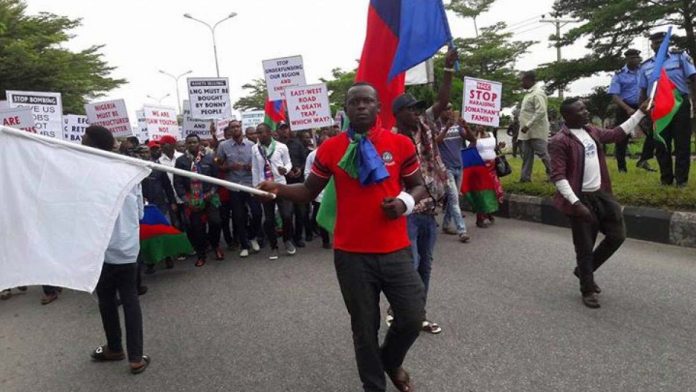 Crisis is rocking the Ijaw Youths Council (IYC), Central Zone, following alleged attempts on the lives of the zone’s Chairman, Tare Porri and some elders in Yenagoa, the state capital.

Porri, yesterday, said he survived an attempt on his life by the Vice-Chairman of the council, Amiebi Turner and some of his loyalists, who invaded the venue of a peace meeting convened by the elders in council.

Briefing journalists at his office in Izon House yesterday, Porri said his deputy stormed the venue of the meeting with bus loads of hoodlums and held him and other elders at gunpoint.

He said properties belonging to the Chairman of the Elders Advisory Council, Mike Wenibowei, who provided the venue for the meeting were destroyed while the entire area was raided raided with valuables carted away.

Wenibowei, former Chairman of the IYC, confirmed the incident and said he saw the thugs holding at least three guns adding that the invaders caused panic in the area through many gunshots they fired into the air.

Wenibowei said it took the intervention of security forces to calm the situation.

Turner and his loyalists were said to be angry following an alleged plan by Porri to handover to one of his supporters before leaving his chairmanship to contest the State House of Assembly seat for Ekeremor Constituency 1 in Bayelsa.

It was gathered that the thugs attacked and beat up two policemen, including an inspector sent to serve an invitation from the Commissioner of Police in the state Don Awunah, to the suspects in Ogboloma.

The policemen were reportedly hospitalized after the thugs descended and vented their anger on them.

The Police Public Relations Officer (PPRO) Asinim Butswat, confirmed the attack on the security operatives, but said he needed a detailed briefing to get the facts of the matter.

“I am aware, I just want to get detailed explanation before I talk to you”, he said.

Porri said he was saved by the intervention of his security aide and the malfunctioning of the locally-made pistol when his deputy pulled the trigger.

He said: “The Treasurer tried to hit me and when I dodged, I saw Amiebi trying to pull the trigger and the gun did not respond. Immediately I used my last strength to hit him and I don’t know how I got out. He still followed me and was aiming at me before my security detail faced him and that was how I escaped being assassinated.

“ They raided the whole street with all their valuables. As I address you, even my phone is still with him and they have vowed to kill me , my wife and my children and they will burn down my house,”, he said.

Porri called on the Inspector General of Police, the Commander, Joint Task Force in the Niger Delta, the police, Director of the Department of State Services in the state and other security agencies to come to his aid.

“ My life and those of my lieutenants are in serious danger. These hoodlums have vowed to eliminate us. They feel the only way to take over leadership of the IYC is by killing all of us. I have reported to the security agencies”, he added.

Porri named others who attacked him as Beledayon Barracks, Juliana Okpu and Daniel Perebi, who are also members of the executive committee of the IYC.

But Turner denied all the allegations describing them as malicious and fallacious and asked the public to disregard the claims.

He said: “The allegations that I mobilise thugs to disrupt meeting, held a gun, and all that and fabricated. I wish the general public to disregard these allegations leveled against me because it was built and watered on falsehood.

“I was not invited for the conflict resolution meeting with the Chairman and other stakeholders of Council,but i got the information and went there to make my stand and raise critical issues that could lead to crisis in the zonal leadership.

“We had series of argument which resulted in reactions by some followers of Porri and, which I find condemable in strong terms. I had to run for my life because I was targeted. I never held a gun or involved in any uproar”.