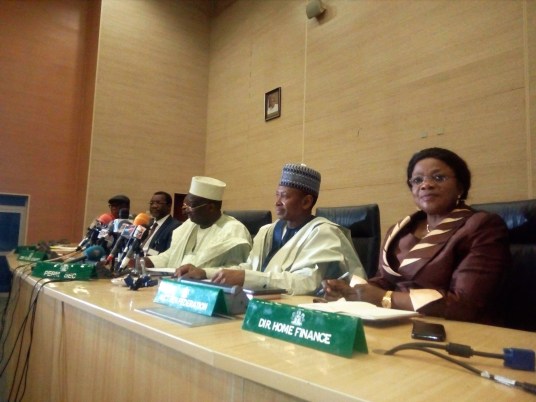 The Federation Accounts Allocation Committee (FAAC) meeting ended in Abuja on Wednesday night without sharing allocations for the month.

No member of the committee agreed to talk to journalists on why they left the meeting without allocations to various tiers of government.

The meeting which was attended by Commissioners for Finance and Accountants General from the 36 states of the federation and the Federal Capital Territory, lasted for two days.

Journalists who waited for several hours for the usual communique issued from the FAAC secretariat at the end of such meetings were thoroughly disappointed when information filtered in that the briefing would not hold.

The spokesperson of the finance ministry, Hassan Dodo, later told journalists the briefing for which he issued the invitations has been cancelled.

“Gentlemen of the Press, I have been directed to inform you that the usual media briefing at the end of FAAC meetings will not hold. Another date will be communicated to you when the committee is ready to brief the Press,” Mr Dodo said.

He refused to take questions from journalists who were anxious to know why the briefing, which usually presents the details of the allocations to the three tiers of government, was cancelled on short notice.

All members of the committee were practically scampering out of the venue of the meeting at the Ministry Finance auditorium apparently to avoid any contact with journalists.

The Chairman of the Commissioners of Finance Forum of FAAC, Mahmoud Yunusa, told reporters they were breaking to go and consult their principals, the state governors.

He, also, did not say exactly why the meeting ended the way it did.

However, PREMIUM TIMES overheard a conversation by one of the commissioners about the outcome of the meeting.

“The meeting has ended. But, there is no money to share, because what the NNPC brought was incomplete. Now we are going for a meeting with the governors on what next to do,” the commissioner was heard saying.

Since February this year, FAAC meetings have ended in stalemate, with the inability of the NNPC to remit enough revenue always cited as reason.

In February, the meeting, convened to consider and approve statutory revenue allocations for the month, ended abruptly.

It took the intervention of the finance minister, Kemi Adeosun, and the vice president, Yemi Osinbajo, for representatives of the states and the FCT to agree to reconvene the following day to share the N647.39 billion that was available.

Although NNPC and top hierarchy of the FAAC, along with finance ministry officials, have met several times to reconcile the revenue shortfall, no report has been issued on what was found.

At the end of the FAAC meeting last month, Permanent Secretary, Federal Ministry of Finance, Mamhoud Dutse, said the scrutiny by the committee members of the NNPC finances was normal.

It was not clear when Wednesday’s meeting would be rescheduled. But, indications are that after a meeting between the state governors and NNPC officials in a secret location in Abuja, they may not delay to reconvene before Friday to enable them pay workers’ salaries for the month.

The NNPC spokesperson, Ndu Ughamadu, did pick his telephone calls Wednesday night. He did not also respond to a text message sent to him.