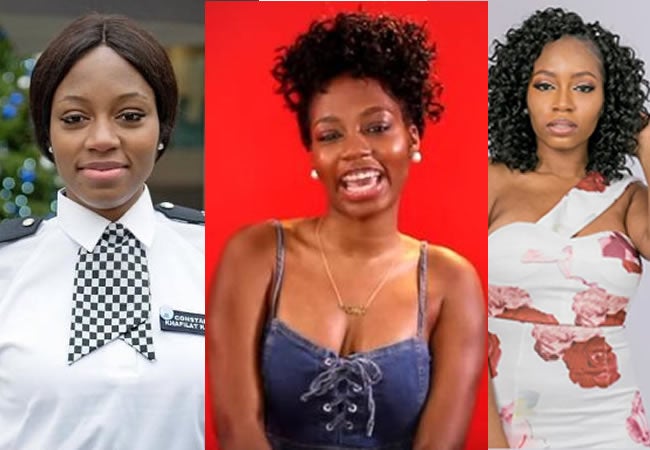 Big Brother Naija’s Pepper Dem season housemate, Khafi Kareem, who is also a Metropolitan Police officer in the United Kingdom, has come under investigation for appearing on the reality TV show despite being refused permission by her employers.

According to the UK Evening Standard, the 29-year-old, who joined the UK Police as a Constable in 2015, is being probed after she was filmed having sex with 31-year-old housemate, Ekpata Gedoni on the show.

The Metropolitan Police said it had not granted Kareem’s request to appear on the show and that an internal investigation would be carried out.

The Force added that Kareem was granted unpaid leave for an “unrelated reason” ahead of appearing on the show, but her request to take part in the programme was denied.

A spokesman said, “A PC attached to the Met’s transformation command requested permission to take part in a reality television entertainment show in Nigeria. Permission was not given.

“The Met is aware that the officer has since appeared on the show without authority.

“The Directorate of Professional Standards has been informed and will be carrying out an investigation into the circumstances.

“The Met does not support the officer’s appearance, nor does she represent the Met whilst appearing on the show.”

The UK Police Force added that any officer found to have breached police standards of professional behaviour could face misconduct proceedings.

“She asked permission to go on the show but, when her request was refused, she went anyway.”

A post on the website of Africa Magic says Ms Kareem joined the show “to do societal good.”

It reads, “Police officer Khafi Kareem believes that you can have it all if you believe in yourself.

“She is not only hoping to win the prize money but she wants the exposure that being in the Big Brother Naija House brings, so that she can do societal good.

“What people don’t know about her is that she is secretly talented in spoken word, singing and dancing. She is an Ekiti native who resides in London.”

The post also said Kareem would spend the prize money on hosting a travel show in Nigeria, as well as investing in charitable causes.

Keyamo hails Anthony Joshua for prostrate before Buhari in...

Presidency Reveals why Outgoing Governors Will Face Trial After...

“Even partially mad people won’t react like PDP over...