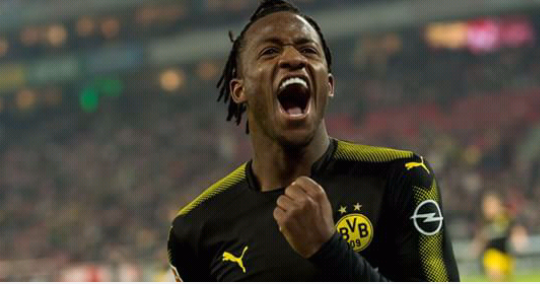 Michy Batshuayi has said that he is happy to wait until after the World Cup to find out whether his future lies at Chelsea or Borussia Dortmund.

Batshuayi, 24, was sent on loan to Dortmund for the second half of the season, and scored nine goals in 14 matches before suffering an ankle injuryin a game against Schalke in April.

The former Marseille player has recovered in time for the World Cup, but still does not know where he will be playing his club football next season.

“There’s already been contact — some phone calls — but I’m not aware of all that,” he told a news conference while on international duty with Belgium.

“It’s up to them to talk, and afterwards there’ll be a decision. But I can’t respond right now because I have the World Cup first.”

Michy Batshuayi proved to be a hit at Borussia Dortmund. TF-Images/TF-Images via Getty Images

When pressed on where he would like to play, he stressed that both Chelsea and Dortmund are great clubs but said that he would rather not indicate a preference at the moment.

“The World Cup is a big event, but I’m not thinking too much about afterwards,” he said.

“I’m thinking about preparing for the friendly matches that are coming up and the World Cup. For me afterwards is really too far away, so I’m not thinking about it at all.”

Batshuayi was, however, keen to talk about his joy of regular football at Dortmund.

“It had been a long time since I had got a run of matches like that. When I think back on Chelsea, I don’t think I ever played two matches back-to-back.

“Once I arrived at Dortmund, I was given a very good welcome. I was shown a lot of faith and a lot of love, and you know that when a player has all that he’s no longer the same player.

“I couldn’t but express myself well on the pitch because I wanted to repay them for that faith they showed in me. So it was a very good time. I learned a lot and I enjoyed it a lot — it was really good.”

Batshuayi is relieved to be available for next month’s World Cup in Russia, after initially being told he would not be able to take part as a result of the ligament injury he picked up in the Revierderby on April 15.

“I was in a lot of pain,” he said. “I didn’t think of [the World Cup] straight away. I thought it was completely broken. I didn’t look at my leg because I was scared.

“The next day I had scans and the German doctors said ‘no World Cup’ — that I would have to forget about the World Cup.”

The prognosis quickly improved, however, and the Chelsea frontman said he was able to walk normally within two or three days once the swelling had gone down.

He will now hope to feature in Belgium’s pre-World Cup friendlies against Portugal, Egypt and Costa Rica before they take on Panama, Tunisia and England in Group G once the tournament gets underway.