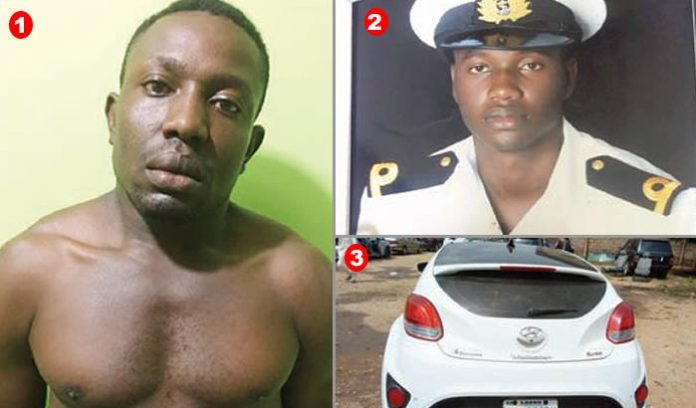 The houseboy of a naval officer, Lieutenant Abubakar Yusuf, has owned up to killing his 35-year-old boss and his girlfriend, Lorraine Onye, blaming the crime on frustration.

After strangling Onye, a 300 level student, the suspect, Raphael Jaja, stabbed Yusuf to death, packed his corpse in a bag and took it to a bush where he set it ablaze.

The native of the Opobo-Nkoro Local Government Area, Rivers State, said he decided to end the lovers’ lives cruelly because his boss allegedly refused to pay his 15 months’ salary, but could afford to buy an expensive phone for the girlfriend and pay N300,000 rent for her.

He said the naval officer had promised to help him save the salary – N15,000 per month – and pay him at once so he could use the money to plan his wedding. He said he felt bad when Yusuf reneged on the promise.

Reports had it that the naval officer killed his lover and took to his heels until recently when a discreet investigation conducted on the incident by DCP Abba Kyari-led Inspector-General of Police Intelligence Response Team unravelled the mystery behind the crime.

Saturday PUNCH learnt the investigation followed a report made by the father of the late naval officer to the police.

The detectives got a lead after tracing Yusuf’s mobile phone to Jaja’s friend in Port Harcourt. The friend, who bought the phone from Jaja, led the operatives to arrest the killer houseboy on Monday, June 4, 2018.

A police officer told our correspondent that Jaja confessed to the crime and led investigators to recover the carcass of the naval officer in the bush as well as the deceased’s Hyundai Veloster which he sold for N1.9m.

“We also recovered the naval officer’s phone which he exchanged with the friend in addition to N30,000,” the officer added.

While giving a shocking revelation about the crime in an interview with our correspondent on Wednesday, 28-year-old Jaja narrated how he struck a relationship with his late boss and lived with him in his one bedroomed apartment.

He said “I am a technician. I have worked at Abuja International Airport. I returned to Port Harcourt in 2016 because my brother was ill. In July 2016, somebody introduced me to Lt. Yusuf that he wanted to install a DSTV. He was serving at the Navy Primary School in Port Harcourt. After I installed the DSTV, he told me to fix some wires. He was happy with the job I did.

“I told him I wanted to go back to Abuja, but he persuaded me to stay back and work for him. He gave me the spare key to his apartment and I started living with him. He promised to pay me N15,000 monthly and that he would pay all my money before my marriage slated for December 2017. He met his girlfriend sometime in 2017. Whenever she passed the night at the apartment, the lieutenant would ask me to sleep in a store in the compound.”

Jaja explained that he helped the late officer to execute two contracts worth N22.8m in September 2017 and he promised to give him a share of N2.5m. He said for ethical reasons, Yusuf did not use his name to secure the contracts, which involved supply of computers to technical schools.

“While I was preparing for my wedding, I asked him to give me N400,000; he said he had no money. I eventually borrowed N320,000 to do the wedding. In January 2018, I went back to him to ask for my money. He said he did not have money and that I was disturbing him. I stopped going to the barracks. In March 2018, he called me several times, but I did not pick his calls. When I later picked, he said he had a job for me. On getting to his office, he said he had given it to somebody else because I didn’t come on time. He laughed at me.

“I went to the barracks to help one of his colleagues fix a DSTV. On my way back home, Lieutenant Yusuf called me to help him take his decoder to the DSTV office for a reset. He gave me N1,000 transport fare. When I came back, he asked me to service his generator. When I finished, he gave me N1,000. I told him the money was small and that he was being unfair to me. I asked him to give me some money so that I could establish my own business to take care of my family. He said he did not send me to go and marry.

“The following day, he called me that the generator was not working again. He told me to buy N1,000 oil on my way to the barracks. After I fixed the generator, I asked him for payment, but he said he had given me N1,000 the previous day. I told him I collected the N1,000 because he was my boss.

“I asked for the money he was owing me again; he said he had no money and that I was disturbing him. He said he was also planning his wedding,” Jaja added.

He told Saturday PUNCH that he began to plan Yusuf’s murder in April 2018 when the naval officer returned from Abuja with a new Hyundai Veloster. Jaja stated that he met with the deceased on April 30 and demanded to know why he refused to pay him.

Ajaja explained, “He said he did not send me to marry and that I should carry my cross. I went back to him the next day for the money. He asked me to help him prepare noodles. There was a drug, Tanlin, in my pocket. I bought it because of a dog that my neighbour, who just packed out, left behind. The dog was disturbing me and I wanted to give it the drug so that it would sleep off. I put a little of the drug in the noodles. I discovered the drug did not have any effect on him.

“On May 3, I went back to his house. I met only his girlfriend at home. We did not like each other, but I decided to be friendly with her that day. I asked her to tell me about her relationship with my boss. She was initially reluctant until I assured her I meant no harm. She told me that she and my boss were supposed to travel to Canada in 2017, but they couldn’t make it. She said he bought a phone for her and gave her N300,000 to rent a house.

“I was annoyed as she was saying all these. I asked her if she knew my boss’ phone password; she said she did not know it. I persuaded her to tell me his ATM card password and she did. I pretended that I admired her hair style and told her to turn her back. The moment she did so, I held her neck and strangled her. She was foaming. She died afterwards. I hid her corpse somewhere in the room and covered it with clothes.”

The self-confessed murderer said his boss did not suspect something was amiss when he returned from work in the evening, adding that the officer retired to bed afterwards. He said he unleashed terror on the boss around 4am while he was still asleep in the bedroom, stabbing him to death with a knife.

“I packed his corpse in a bag and kept it in the boot of his car parked on the premises. I cleaned the bloodstains on the floor, wore his uniform and drove the car out of the barracks. I drove the car to a village called Apani and dropped his body in a bush. I looked for a tyre and set his corpse ablaze. I burnt it so that nobody would be able to trace him.

“Still in the uniform, I drove the car to Benin, Edo State, where I sold it to one Alhaji. He did not want to buy the vehicle because I could not give him the documents. I convinced him that I am a naval officer and that he has no reason to be afraid. He bought the car N1.9m, but he was to pay me a balance of N120,000 before I was arrested through a church member I exchanged my boss’ phone with in Port Harcourt,” he narrated.

The expectant father further revealed that prior to his arrest, he travelled to Lagos State to withdraw N250,000 in Yusuf’s bank account, adding that he sent a text message to Onye’s phone to implicate his boss and travelled back to Port Harcourt.

He said, “I withdrew the money in Lagos so that the police would focus on tracking the withdrawals to the state. There was a day my boss and Onye were arguing over their relationship. He told her that his father had already got him a woman he would marry. So, I exploited that argument to send a text message to her phone, stating that my boss killed her. I killed them out of anger. It was not intentional. All I want is forgiveness.”