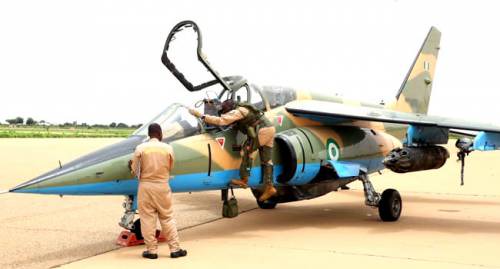 The Nigerian Air Force has refused to disclose the location of the missing Alpha Jet NAF 475 which crashed on March 30 in Borno State in order to make Nigerians lose significance of the incident, military sources told newsmen.

Sources added that the NAF authorities allegedly warned its search-and-rescue team not to disclose the whereabouts of the Alpha Jet which is now missing for 12 days, even as the authorities have yet to contact the families of the two affected pilots – Flight Lieutenant John Abolarinwa and Flight Lieutenant Ebiakpo Chapele.

“The crashed Alpha jet has been found. I can assure you of that, but the NAF people are playing smart to let the incident die down and lose its significance. The pilots’ families have not been contacted yet, and when they are contacted, it will be done in another discreet manner to douse tension.

“There was an incident in February, where a NAF Beechcraft King Air 350i Surveillance Aircraft crashed in Abuja, and killed six personnel; that one is still being investigated and then this embarrassment again. So, they know what they are doing,” a source stated.
Source – Sahara Reporters

Navy Begins Recruitment, See Criteria For Eligibility And How To Apply